Australian cricket legend and sports speaker David Boon, affectionately known as  “Boonie" with his trademark moustache, is considered to be one of Australia’s best ever cricketers with statistics including 107 Test Matches, 7422 Runs, 20 Centuries, 180 One Day Internationals and 300 1st Class Games. 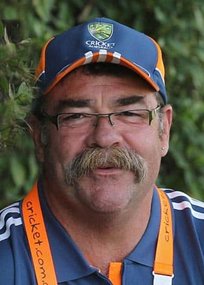 David was a pleasure to work with. Our guests were in awe and really enjoyed hearing about David's experiences throughout his amazing career. He was relatable, funny and very open to answering the many questions our audience had, even the tough ones. We would love to work with David in the future.

David Boon travels from TAS
Fee Range: Up to $5000

Australian cricket legend and sports speaker David Boon, affectionately known as  “Boonie" with his trademark moustache, is considered to be one of Australia’s best ever cricketers with statistics including 107 Test Matches, 7422 Runs, 20 Centuries, 180 One Day Internationals and 300 1st Class Games.

Now an ICC Elite Official; a former Cricket Australia selector, head of Cricket Department at Tasmanian cricket and a talking plastic doll icon for VB, David’s dry wit and clever repertoire keep audiences mesmerized and looking back fondly on an era full of characters in the sport of cricket.

Boonie , who still heavily influences Australian cricket today, and who also holds the record for being heavily under the influence on a flight from Australia to London, is a must see speaker – engrossing, motivational and hilarious.

As one of Australia’s cricket greats, and with his affable nature and humility, he is a popular keynote speaker and MC for corporate and community events.

Born in Launceston, David made his debut for Tasmania against Queensland in 1978-79, and his test debut against the West Indies at the Gabba in 1984-85, scoring a half century in his second innings.

Boon became Australia’s top batsman in the early 90’s with brilliant centuries against the West Indies, India, and successive hundreds against England at Lords, Trent Bridge and Headingly. He made 21 Test tons, none better than his 184 not out in the second innings of the Bicentennial Test at Sydney to extricate Australia from a potentially match-losing position. He received the player of the match award for that knock and was voted International Cricketer of the Year.

After his playing days came to an end, David became an Australian Selector and later, an ICC Match Referee.

Former Prime Minister Paul Keating said of his retirement, “When the team was up against it, we came to count on you to fight with skill and courage. Cricket fans around the world will miss the great character and talent that you bought to the game.”