David Smorgon OAM’s journey includes a myriad of life experiences…from early days as a lawyer and a gruelling three-year apprenticeship in the abattoirs, to growing a $1 billion family business, steering a battling AFL club to survival and enduring personal tragedy. There is arguably no one better equipped to talk about business, success, adversity, teamwork and resilience. 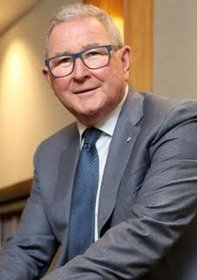 “Excellent.  Mr Smorgon covered many relevant areas.  He was very interesting and maintained the interest of audience throughout his presentation.”

“Excellent.  David had the audience captivated.  His talk on family businesses was very relevant to our target market, and his willingness to answer questions particularly about the Bulldogs was excellent.”

As discussed you had a considerable impact on our Senior Management Team and you were referenced by most presenters across the forum.  It was a great story told with passion and compassion.

I am very happy for you to refer to your interaction with Xstrata coal and Iron Ore.

“Your address to the Australia day Breakfast in Queens Hall last Tuesday was regarded by everyone present as the most impressive in recent memory”.

“Thankyou for your great contribution to the program launch. The distributors feedback was excellent with your address clearly hitting the right spot”

“David was given the highest possible rating”

David Smorgon OAM’s journey includes a myriad of life experiences…from early days as a lawyer and a gruelling three-year apprenticeship in the abattoirs, to growing a $1 billion family business, steering a battling AFL club to survival and enduring personal tragedy. There is arguably no one better equipped to talk about business, success, adversity, teamwork and resilience.

David spent 25 years as an executive and director with Smorgon Consolidated Industries, followed by 16 years as the chairman of the Western Bulldogs AFL Club. David is an outstanding speaker who can speak on almost any topic.

Although a trained lawyer, David joined the family business at the age of 23. David advanced to be a senior executive at Smorgon Consolidated Industries - the large family business that spanned meat, paper, glass, plastics and steel industries.

When Smorgon Consolidated Industries was sold off in 1995 in a staged divestment it ended a 70-year family history and marked one of the lowest points of David’s life. He and others fought to save the family business and were bitterly disappointed when their efforts failed.

When the Western Bulldogs offered David the presidency in 1996, it presented a new opportunity and challenge and David quickly cemented his reputation as a force in the business and sporting worlds.

As one of the smaller teams in the AFL competition, David steered the Bulldogs through constant battles of survival in the cut-throat world of AFL, where business perspective and professionalism are paramount. David stepped down as President in December 2012, ending a 16 year reign.

In 1996 David and his three sons established Generation Investments focusing on business opportunities, equity and property investments. His most recent business venture is PointMade, where he assists senior executives to professionalise their pitch and speaking skills. Drawing on his own business acumen and astuteness, he enjoys imparting his own rules for success to inspire others.

Testament to his wealth of experience in family business, which taught him the importance of consultation and transparency, David was named the inaugural chairman of Family Business Australia in 1997, a position he held for six years.

He was awarded the Medal of the Order of Australia in 2000 for his service to the Western Bulldogs and community contributions through education, social welfare and health. In 2013, David accepted the role of Patron for SportsConnect, an organisation connecting business and sport.

As a speaker David is refreshingly honest, touching on his own successes and failures whilst imparting a wealth of knowledge. As such he has attracted stellar reviews and testimonials consistently over 15 years.