Print
Derrick was an Australian Police Sniper, Diver and Counter-Terrorist operative when he was shot 14 times in less than 5 seconds, lying on the ground for three hours before he could be rescued. Doctors don’t know how he survived and predicted he would never return to work. 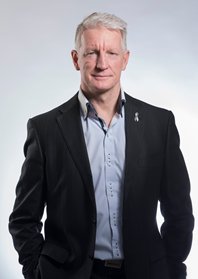 Thanks for your presentation to our Leadership Team. Your stirring talk was a significant contributor to our day’s success. It was a genuinely moving presentation that touched us all and made us believe that our goals are achievable.

I would certainly recommend Derrick to any organization seeking a dramatic account of going against the odds and achieving goals through sheer determination.

The Financial Planners were raving about you all afternoon and could relate to how you had to make a choice to ‘sink or swim’ with the major changes you faced in life. The day itself was a great success and one of the main contributing factors to its success was your final talk on the day.

Our group was so moved by your presentation in Hobart in relation to choices, changes and challenges that we are happy to book you for our next three conferences too. We couldn’t think of a more appropriate speaker who can relate to what our people are going through as an organisation at this time.

Derrick McManus epitomises achievement and defying all odds and is backed by University research into the Durability of Human Performance.

Derrick was an Australian Police Sniper, Diver and Counter-Terrorist operative when he was shot 14 times in less than 5 seconds, lying on the ground for three hours before he could be rescued. Doctors don’t know how he survived and predicted he would never return to work.

Derrick’s team was tasked to arrest a high-risk offender.  The offender started shooting and Derrick was the target.  The 14 bullets ripped into Derrick’s body shattering bones, severing arteries and tearing through organs.  The first Doctor to get to Derrick in the field said, “When I first saw him I thought he was already dead … I actually don’t know how he survived, he’s an amazing human being”.

Derrick clearly recounts the 14 bullets, the three hours on the ground and the years of rehabilitation.  It is sometimes heart wrenching, sometimes hilarious but always an absorbing story of determination to survive, set goals, build personal belief and overcome challenges and changes.

In Derrick’s line of work, his ability to respond decisively and positively to challenge, make decisions and take action under pressure and lead his team in high-risk and uncertain times make are the difference between success and failure.

All medical predictions said Derrick would struggle to merely walk properly and he would never return to work. The fact that Derrick defied all the odds and made a full return as a Sniper, Diver and Counter-terrorist operative is pure inspiration alone.

Earlier in Derrick’s career he was awarded the inaugural SA Police Bravery Medal for his actions when he and his partner wrestled a gun from the hands of a man intent on shooting them. During the fight Derrick put his thumb between the hammer and body of the pistol to prevent it firing - potentially saving his partners and his own life.

If you want a purely inspirational presentation of achievement over adversity – Derrick’s story is one of the best you will ever hear.

If you want your people to gain more self-awareness and self-belief, make decisions and take action when the pressure is on, to set goals or just overcome the adversities of life and work – Derrick is the man to help your people to develop durability and sustain their optimum performance under any pressure.

Durability of Human Performance is the ability to sustain Optimum Performance under pressure. Optimum is not peak performance and it is not perfection.  Optimum is the very best you can possibly do in the current circumstances.

We all intuitively know that continually maintaining peak performance or sustaining perfection is almost impossible. Circumstances change, markets change, clients change.  However, wouldn’t you like your staff, or yourself, to be able to sustain Optimum Performance under pressure? Sustain the very best they can possibly do!

Resilience is the current buzzword for managing personal and business challenges.  Resilience is known as the ability to ‘bounce back’ after failure. Resilience is a life skill we have all wanted to provide for our children, our staff, our students or our businesses.

Derrick McManus has developed a simple yet powerful process for ‘Durability of Human Performance’.  Durability thinking is the cutting edge of development in positive psychology. The University of South Australia, School of Psychology, is currently working with Derrick to further research and develop the Durability process.

When Derrick was shot 14 times, in less than 5 seconds, he was literally laughing about ‘what the boys would say when he got back to work’ and it didn’t take long for them to start coming up with some very creative nicknames. With a twisted, warped and cheeky sense of humour, Derrick tells one of the most dramatic and inspirational, true-life stories available in Australia today.

Be inspired by Derrick’s zest for life in this totally open and frank real life account of the event that should have taken his life. Learn how to overcome your biggest challenges and to triumph where others believe it’s impossible.

And much, much more …

Get Your Head in the Game

Elite athletes around the world will tell you that success is 10% physical and 90% mental. The same rule applies for business, personal, community or any success at all. The greatest challenge you will ever have to achieving success in your life is ‘Inside Your Head’. This half-day program is ideal for executives and team leaders looking to advance their personal skills. Derrick instills his philosophies, behaviours and attitudes into pragmatic and practical tools, formulas and models to:

And much, much more

The 7 Pillars of Leadership

Special Forces selection and training includes the ability to be a leader in the toughest and most demanding work environments in the world. 7 Pillars of Tactical Leadership are distilled from this peak performance arena and are as applicable in the office as they are anywhere. This half-day program will show you how to use the same 7 Pillars to:

The Magic of Thinking BIG

Prior to the shooting Derrick planned to survive ‘a shooting’. He had a contingency plan, he had visualised himself succeeding, surviving and thriving afterwards. Derrick was ‘Thinking BIG’.

While going through his rehabilitation he was encouraged, by some very influential people, ‘to slow down, relax and enjoy the obvious pension for the rest of his life’, but Derrick was ‘Thinking BIG’. He pushed himself for the best he could create whatever that might be.  His ultimate aim was to return to family and, despite medical predictions, return to STAR Group.  Derrick was ‘Thinking BIG’.   Let Derrick show your personnel how they too can achieve BIG by thinking BIG.

This program uses analogies from all of Derrick’s life, not just the shooting, to give you proven methods to: