Domenico and the Latin Mafia

Print
Domenico Taraborrelli is one of Brisbane’s most experienced and versatile multicultural cabaret entertainers with the ability to perform an endless repertoire of world music including Jazz, Latin, Ballroom, Background, Rock & Pop and others that are sure to please all. 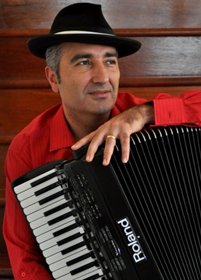 Testimonials for Domenico and the Latin Mafia

Domenico and the Latin Mafia travels from QLD
Fee Range: Up to $5000

Domenico and the Latin Mafia's Biography

Domenico Taraborrelli is one of Brisbane’s most experienced and versatile multicultural cabaret entertainers with the ability to perform an endless repertoire of world music including Jazz, Latin, Ballroom, Background, Rock & Pop and others that are sure to please all.

Domenico commenced his musical career in 1971 at the age of 4. He studied music on the traditional European instrument called the Piano Accordion, gaining recognition amongst his peers as a specialist of the instrument. In 1986, Domenico commenced performing with a three piece cabaret band at numerous private functions, clubs, hotels and events throughout Queensland.

After working a residency for over 15 years, Domenico teamed up with long time friends, Gianni, Jose, Juan & Adam to form a sophisticated themed caberet band known as The Latin Mafia performing a fresh and diverse selection of swing & latin classics from the Rat Pack era.

Featuring a dynamic vocal ability and musical prowess on the Accordion that has been fused with the latest electronic MIDI technology, Domenico and The Latin Mafia continue to perform for private functions, clubs, hotels and events throughout south-east Queensland.

In 2009, Domenico was honoured to be the emcee for the Queensland Multicultural Awards Presentation Ceremony at Queensland’s Parliament House and to then later entertain the numerous dignitaries, distinguished guests and winners in the Grand Hall with The Latin Mafia. Later that year, Domenico and The Latin Mafia were invited to perform at the closing ceremony of the 62nd ‘Coupe Mondiale’ World Accordion Championships held in Auckland New Zealand amongst his peers from around the world.

Domenico has performed at numerous functions, festivals and events along the east coast of Australia and has performed with Queensland Pops Orchestra and the Barrier Reef Orchestra as a feature artist.

In 2012, Domenico joined the popular 10 piece Celtic band, Murphy’s Pigs, featuring his talented skills on vocals and the piano accordion and bringing the band to a new dimension. In 2013, the band were runners up in Tamworth for the battle of the bands and were nominated in the Golden Fiddle awards. In 2014, the band won an Australian Celtic Music album of the year, "In The Lap Of The Hogs". In 2016, the band travelled to France to perform at the FESTIVAL INTERCELTIQUE de Lorient, Brittany.

With a core blend of world-wide cultures and tastes, Domenico can perform a diverse range of musical styles from all around the world including classical, sweet jazz from the 40-50’s, passionately romantic Italian & Spanish classics, all of the Hot & Spicy South American rhythms as well as the great pop and rock from all eras.

Domenico can provide high quality entertainment with a touch of class and elegance for your next function or event.