"If you can’t win, make the person in front break the record!" They don’t come any livelier than the boy from the bush, Don Elgin is entertaining, motivational and an all round larrikin; he represented Australia in the athletics at four World Championships, three Paralympic Games, two World Cups and a Commonwealth Games. 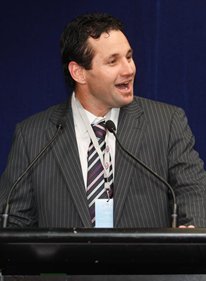 “I have heard many speakers, both professional and ‘hobbyists’ in the twenty-seven years I have been working.  Don Elgin is one of only a few speakers who have left me with lasting impressions.  Don’s presentation’s are of the highest standard in quantity and quality.”

“Don is a great communicator with a personable nature that really enthuses his audience.  Don has always managed to be able to target his presentation exactly at the audience and get rave reviews, and subsequent bookings afterwards.”

“Don is a very entertaining and inspirational speaker who appeals to a wide audience.  I have received excellent feedback from every speaking engagement that he has performed for us.  He adapted his presentations very well depending on the situation and our requirements.”

“Excellent.   Don has a very endearing and approachable manner.  He also managed to weave in our conference message into his talk.  A very inspiring speaker.”

"If you can’t win, make the person in front break the record!" They don’t come any livelier than the boy from the bush, Don Elgin is entertaining, motivational and an all round larrikin; he represented Australia in the athletics at four World Championships, three Paralympic Games, two World Cups and a Commonwealth Games.

Don Elgin was raised in the NSW town of Tocumwal. Being born without the lower portion of his left leg was no barrier for this boy who would make his first Australian team at 18 years of age, becoming a World Champion and a staggering 20 years later would represent Australia at the Commonwealth Games.

One of the longest serving scholarship holders at the Victorian Institute of Sport Don competed in the Sydney 2000 Paralympic Games where he won bronze in the Pentathlon. Two years later he finished with a Silver medal at the 2002 IPC World Championships. At the 2004 Athens Paralympic Games he became a triple Paralympic medalist winning one Silver and two Bronze.

As a respected voice on sport both on and off the track, Don commentated at the 2006 Commonwealth Games in Melbourne and appeared on Andrew Denton’s ABC TV show Enough Rope. He was the inaugural patron of Disability Professionals Victoria. He is also a former president of Sandringham Athletics Club and former vice President of The Amputee Association of Victoria. Don is a founding board member for the Start Foundation and the inaugural ambassador for New Horizons Club.

A true leader Don was the Australian flag bearer at the 2006 World championships and went on to become the Track and Field team manager for the Australian team at London 2012 Paralympic games before making a successful return to sport to compete at the 2014 Glasgow Commonwealth Games.

Away from the sporting arena Don is a highly sort after motivational speaker and the founder and director of StarAmp Global a boutique management Company managing some of Australia’s finest amputee talent.

Don is living proof that with the right attitude anything is possible, not only has he exceled in elite sport and mixed it with some of the biggest names in the film industry, he creates tailor made powerful presentations based on his real life experience. Don takes his audience behind the scenes of his extraordinary journey from little bush battler to world-beater.

Don walks the talk and his approach to life has clients walking out with a spring in their step every time. He is upbeat and makes no secret that he is the happiest bloke alive and is very happy to share real life practical strategies to get the most from every day.

Don leaves you with no doubt as to why he is a highly sort after motivational speaker in Australia and around the word. His message is one for all ages.

•          Team building from the sports field to the  boardroom

•          Embracing changes and building morale in the  work place