Don Meij is the driving force behind the highly successful franchise Domino’s Pizza.  Entrepreneurial, innovative, creative and strong in delivery, Don has been recipient to many business awards. 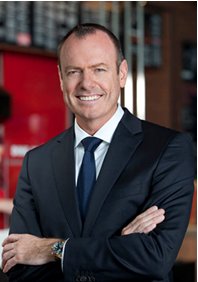 From pizza delivery driver to pizza store entrepreneur, to Group CEO and Managing Director of Australia’s largest and first publicly-listed pizza chain, Don Meij has proven passion, dedication and a keen business sense mean everything when it comes to climbing the corporate ladder.

After starting as a pizza delivery driver in 1987 in Redcliffe, Queensland, for Silvio’s Dial-a-Pizza (“Silvio’s”) while studying to be a high school teacher, Don fell in love with the business and has since slowly worked his way up the ranks.

In 1996 Don became a Domino's franchisee and built a network of 17 stores, before vending his stores into Domino's in 2001 to become Chief Operating Officer (2001) then Chief Executive Officer (2002). In May 2005, Don led Domino's to become Australia's first publicly-listed pizza chain on the ASX.

In 2013, Don led the Company through its biggest acquisition with the announcement of a 75% equity interest in Domino’s Pizza Japan (DPJ). DPJ is the third largest pizza delivery chain in Japan with almost 400 stores. It also provides Domino’s Pizza Enterprises an exciting opportunity to leverage the proven track record of successfully growing the Domino’s network to deliver shareholder value.

Don has always held a deep passion for innovation and entrepreneurialism and in July 2014, under Don’s vision and leadership, Domino’s Australia launched a world first initiative – Pizza Mogul. Pizza Mogul is a responsive website and mobile app that allows customers to: create their own pizza, identity and branding; share to their social networks; and earn a cut of every sale. Pizza Mogul has challenged not only the pizza industry, but the entire retail industry as a whole.

In 2015, Domino’s introduced GPS Driver Tracker technology that allows customers to track pizza from the store to the door. Born out of safety for the Company’s drivers Don was instrumental in creating and implementing the system across Australia.


Domino’s also introduced a world first innovation in 2016, with the launch of DRU – an autonomous pizza delivery vehicle set to take the world by storm.

Don’s international Domino's awards include Pizza International Manager of the Year 1996 and Chairman's Award for Outstanding Leadership in the Domino’s worldwide network 2004.

Today, Domino’s is the market leader in Australia and New Zealand, with strong business in the France, Belgium, the Netherlands, Japan and German markets. With over 1900 stores to the Domino’s Pizza Enterprises, Don has never been so determined to continue the growth and success of the brand that has already come so far.

He much prefers to go by the role of Chief Enthusiasm Officer bringing to life the wise words from business leader Howard Shultz 'expect more than others think possible'.

The keynotes delivered by Don Meij reflect the entrepreneur's business-savvy tendencies and incessant drive to innovate and create great products and how the brand keeps its products and services competitive and relevant., Don Meij has revolutionized the way the company makes and brands its pizza. Responsible for the company's 'Classic Crust,' which was released in 2002.

When asked what his favourite pizza is he says it's almost like picking a favourite child, he loves them all equally but today it's definitely the trusty faithful Pepperoni on thin crust.


Get to know more about the man behind Australia's biggest pizza brand - Don Meij.