Print
With over 25 years of experience, Donald Mackee is a unique multi-talented expert on engaging audiences at live events, at conferences and in other media formats. A conference MC, comedian and actor, Donald brings his professionalism, humour and style to all events. 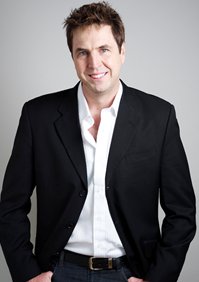 We could not have been more pleased with the results! Donald was hilarious - providing everything from party trumpets, trivia competitions, energising games - to the special guest appearance and song and dance routine from 'Harry Sparkle" in an outfit that defies description."

Thanks for your support at our MBE conference, we have had exceptional feedback from clients and in fact I just got off the phone to one of them who raved about you and Robi and your ability to keep them engaged and attentive for the two days. From my perspective you were both a delight to work with you, very professional, very entertaining, presented with enthusiasm and passion and ensured the conference stayed on track for the two days. You made my job very easy as you basically managed the two days and the agenda. I look forward to working with you again soon Thank you.

Staff Conference is a challenging job at the best of times and The Rechargeables added a whole new level to the role. They engaged, they entertained, they kept people organised and in order, they challenged and they made laughter. Most importantly, The Rechargeables treated the audience as though they were intelligent, so they had them in the palm of their hand. They were a true delight to work with and ultimately flexible. The Rechargeables are true professionals in this rare art. I simply cannot recommend them highly enough.

Donald Mackee travels from NSW
Fee Range: Up to $5000

Donald is a unique multi-talented expert on engaging audiences at live events, at conferences and in other media formats.

As a successful MC, comedian, actor, writer, director and entertainment producer with over 25 years of full-time professional experience, Donald has done live performances for over one million people. He can guarantee results with impact, using ‘audience tested’ creative engagement mechanisms and material. From the vast and varied work Donald has performed, created and produced he has honed his skills into an effective corporate creative communication tool which enables him to design and deliver audience architecture, captivation and engagement of audiences.

Donald’s experience and success stretches the length and breadth of the corporate and entertainment industries. He has worked professionally in the creative arena on diverse corporate events, conferences, gala dinners, awards nights, meetings and workshops. He has also worked professionally in live theatre, musicals, theatre in education, comedy cabaret and improvisation. He has written and produced over 15 two-hour live comedy/musical shows, countless character stand-up routines, a multitude of corporate videos plus numerous road shows, sales and marketing presentations. For ten years he also owned and operated Sydney’s largest and most popular comedy venues, Kaos Comedy Restaurants.

Donald’s creativity is tailor-made to each pitch and event. He is an expert at coming up with the ‘killer’ creative and content that weighs and satisfies the needs of the client, the event organiser, the budget and the audience.

Captivating an audience’s attention is paramount to putting them in a mindset receptive to communication, learning or entertainment. Whether at a live forum or conference, gala dinner or awards night, this is what Donald will do as a world-class MC.