Print
A principal focus of Dr Hewson's career has been in Asia, where he has a wealth of contacts and experience in both Government and business, having operated in Asia for the last 25 years as well as a consultant to business, government and international agencies such as the IMF, UNESCAP and ADB. 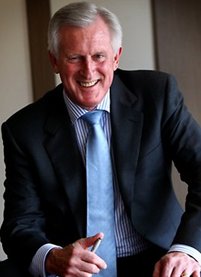 Dr John Hewson is an economic and financial expert with experience in academia, business, government and the financial system.

Dr Hewson has worked as an economist for the Australian Treasury (Census and Statistics), the Reserve Bank, the International Monetary Fund as an advisor to two successive Federal Treasurers and the Prime Minister.

Dr Hewson's business career, before entering politics in 1987, was as a company director and business consultant and included roles as Executive Director, Macquarie Bank Limited and as a Trustee of a major private superannuation fund.

Dr Hewson's political career spanned eight years as a Member for Wentworth in the Federal Parliament. He was Shadow Finance Minister, Shadow Treasurer and Shadow Minister for Industry and Commerce and the Leader of the Liberal Party and the Coalition in Opposition for four years.

Since leaving politics in early 1995, Dr Hewson has run his own investment banking business and is currently Member, Advisory Council of ABN AMRO. In addition, he is Chairman, Global Renewables Limited, Australian Bus Manufacturing Company Pty Limited, Strategic Capital Management, Belle Property and Osteoporosis Australia. He is Vice Chairman of GRD Limited and a Director of GRD Kirfield, Netra Services and the Positive Aging Foundation and President of the Arthritis Foundation. He is also a Director of a number of other public and private companies.

A principal focus of Dr Hewson's career has been in Asia, where he has a wealth of contacts and experience in both Government and business, having operated in Asia for the last 25 years in each of the areas mentioned above, as well as a consultant to business, government and international agencies such as the IMF, UNESCAP and ADB.

Dr Hewson's arresting presentations resonate with his specialist knowledge. His flexible presentations draw upon every facet of his experience, giving audiences a unique overview of economic, political and government policy.

Member, Fraser Government Task Force on Final Report of The Australian Financial System Inquiry, to assess and advise on the implementation of the Report

Adviser to Tasmanian Government on banking, finance and related matters

Member, Eminent Persons Group on Current and Prospective Economic and Social Performance in the UNESCAP Region

The Special Advisor to the Under Secretary of the United Nations and the Executive secretary on Infrastructure Financing, UNESCAP (current)

Editorial Advisor, Member Advisory Board and Columnist Triple A magazine

A host of invited columns in Australian and overseas publications

Many Columns have led the public debate in areas such as RBA independence, inflation targeting, floating $A, monetary/fiscal/micro reform, privatization, tariff reform, labour market reform, the Future Fund, climate change/sustainability, opposition to Iraq war, traffic congestion/pricing of road space, and a host of others.

Forging Ties between Asia and Australia

Surviving in a Competitive Business Environment