Print
Australian of the Year 2022, Dylan Alcott AO, is one of the countries most successful and well recognised Paralympians. In 2021 he became the only male in any form of tennis to win the 'Golden Slam', winning the Australian, French, Wimbledon and US Open Championships, together with his gold medal from the Tokyo Paralympic Games. 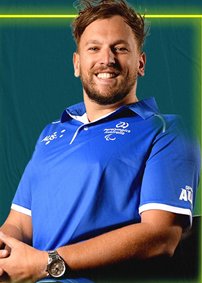 Dylan was a fabulous way to end our conference with a bang! He was dynamic and very engaging, refreshingly open with sharing his story. The highlight of our event, we loved every minute!

Dylan was fantastic, we hope to have him along again.

Inspirational story told by an inspirational Australian.  Dylan’s presentation was a highlight of the conference and included a great balance of important life and business messages.  Highly recommended for any conference.

The team were literally moved by Dylan. His likeable, down to earth attitude, and his story was both interesting and motivating.

Feedback on Dylan’s session has been phenomenal. The perfect blend of humour, realism and inspiration to be the best version of yourself. Dylan really struck a chord with our audience and people are still talking about it!

Dylan captured the audience’s attention from the beginning of his story. He was a great mix of funny and serious. All our attendees felt so special to hear his journey and talk to him afterwards.

Dylan provided one of the most powerful, entertaining, thought provoking and engaging presentations our group has seen.  Never have I received so many positive comments from a group than I did about Dylan – a truly inspiring man!

Australian of the Year 2022, Dylan Alcott AO, is one of the countries most successful and well recognised Paralympians. In 2021 he became the only male in any form of tennis to win the 'Golden Slam', winning the Australian, French, Wimbledon and US Open Championships, together with his gold medal from the Tokyo Paralympic Games.

At the age of 17, Dylan became the youngest ever wheelchair basketball gold medallist at the 2008 Paralympic Games in Beijing, and after gold at the 2010 World Championships, and silver at the London 2012 games, decided to switch sports to wheelchair tennis. In addition to his incredible successes at the Rio Olympics, Dylan Alcott has also won and incredible 15 grand slam singles titles to date, including his second consecutive French Open and Wimbledon titles and the last seven Australian Open titles.

In 2017, Dylan launched the Dylan Alcott Foundation, a foundation created to help young Australians who are struggling to come to terms with their disabilities.

He also works extensively in the Australian media landscape, making regular appearances on Channel Ten’s The Project and Channel 7 Sports, and is a former Triple J Radio host.

In 2019 Dylan was the Australian Logies 2019 Graham Kennedy Most Popular New Talent Award winner and in 2020, won the Governor's Award Victorian Male Athlete of the Year - Frank Wilkes Award. And if that's not enough, Dylan Alcott was awarded 2022 Victoria Australian of the Year.

Dylan was appointed an Officer of the Order of Australia (AO) in 2022 for distinguished service to paralympic sport, particularly to tennis, and as a role model for people with disability, and to the community through a range of organisations.