Widely recognized as a cast member on hit TV show ‘Offspring’, Eddie Perfect is one of the most diverse and respected artists in Australia.  Eddie is a writer/composer and performer. 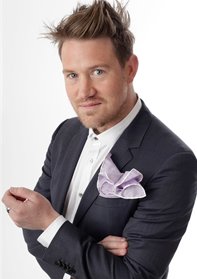 The conference went well, feedback from students and teachers alike were very positive. Eddie was great, he was able to engage the students and they all enjoyed hearing about his own personal experiences.

Eddie Perfect was not only a major draw card for our Applied Learning Awards event, his presentation exceeded our expectations and captured the audience’s imagination. Eddie enthralled the audience of young people and adults, reminding students that they are “balls of potential” who can chart their future course by using all of the knowledge taken out of the opportunities they’ve been given to learn. Eddie reminded students that a mix of success, failure, adversity and learning is positive and when thinking about a future career you should “make it something you are passionate about, care deeply about and that you find inspiring”.

At the age of 36, he has already made his mark in the fields of comedy, music theatre composition and bookwriting, playwrighting, screenwriting, classical music, jazz and acting for stage and screen. He's won multiple awards for his work both as a performer and a writer, and has worked with top creatives including Baz Lurhmann

Eddie has written and toured several shows including, Angry Eddie, Cliff Hanger: Catch A Falling Star, The Big Con with Max Gillies, Drink Pepsi Bitch, Shane Warne The Musical, Songs From The Middle, a collaboration with The Brodsky Quartet and the Australian National Academy Of Music and most recently the award winning Misanthropology. He has composed music for Malthouse Theatre's productions of The Big Con, Babes In The Wood and Helen Noonan's Voicing Emily as well as composing and performing music for the Helpmann, Awgie and Inside Film Awards and for Network 10's Offspring.


Eddie has also won several awards for his writing and composition, including Green Room Awards in both 2002 and 2003, as well as the 2004 Melbourne Comedy Festival's "Best Newcomer" Award and the "Golden Gibbo" Award for his solo show Angry Eddie.

He was voted number one in the field of Arts and Entertainment by the Bulletin Magazine for its Smart 100 awards in 2004. Drink Pepsi Bitch won the Best Cabaret award at the 2006 Adelaide Fringe Festival and in 2008 he received a Green Room Award for his portrayal of Alexander Downer in Keating! The Musical.

In January 2011 Eddie Perfect premiered his new solo show, Misanthropology, at the Sydney Festival, earning him the 2011 Helpmann Award for Best Cabaret Performer.  In 2012 Eddie performed the role of Luther Billis in the Opera Australia production of South Pacific, and in 2013 Eddie premiered a new show with fellow musical comedians Tripod set to tour nationally - Perfect Tripod Australian Songs.