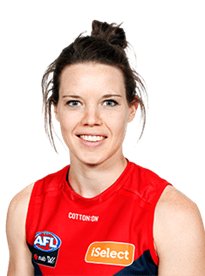 Elise O’Dea was born in Canberra, ACT and moved to Melbourne in 2013. O'Dea has two sisters and is a lifelong Melbourne Demons supporter. Whilst juggling her full time job as a chartered accountant in Fitzroy, O'Dea has achieved so much in her sporting career to date and is known to be one of the hardest workers off field.

Before the AFLW came to fruition, O'Dea was already a household name across women's AFL. She is a five time premiership player with the Darebin Falcons whilst also becoming a premiership captain in 2017. After two outstanding All-Australian seasons for Melbourne, it was no surprise to see O'Dea named as co-captain for 2019 alongside Shelley Scott. An integral player in Melbourne's structure, O'Dea is a tough competitor and efficient ball user in her inside midfield role.