Elysse Morgan is the ABC's leading voice on business, finance and economics. The award winning journalist hosts Australia's most respected nightly business program The Business.  She has earned a reputation for forensic and insightful interviews, bringing warmth and humour to what can be dry topics of business and economics. 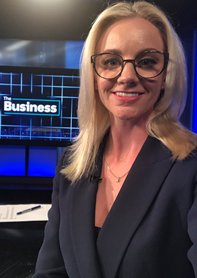 "Elysse as always, your detailed knowledge of the subject matter and incisive question contributed greatly to the overall dynamics of the event. The feedback from our attendees has been overwhelming positive."

Her career began at Sky News in Canberra where she produced the award winning '2007 Election Agenda' programs.

Elysse moved to the ABC as a rural reporter in 2009 and was based in Port Pirie, where she won several awards for her coverage of devastating drought as well as the fallout of the GFC and then subsequent mining boom on rural and regional communities. Elysse then took the opportunity to move to the NSW Rural team where she hosted the statewide Country Hour program where she earned a reputation for tough interviews.

Elysse' specialist business, finance and economics knowledge saw her offered a role on the ABC's Australia Network Business Today program as a reporter and producer and became the executive producer before moving the ABC's business desk where she reported for leading current affairs programs including AM, PM, 730 and The Business. During this time Elysse was instrumental in shaping the coverage of business and economics on the ABC's news channel, which is now a core part of the network's offering.

Elysse was then invited to co-host The Business before taking over the program in 2017. She has earned a reputation for forensic and insightful interviews, bringing warmth and humour to what can be dry topics of business and economics.

Elysse is passionate about sharing her knowledge of the subject and regularly gives her time to schools and charities to help teach and inform people about finance.

Elysse is a sought after public speaker and MC having worked for the CSIRO, corporate regulator ASIC, Australian Business Economists, Twitter, facilitated major telecast events for AMCHAM and the British Chamber of Commerce, and hosted the Australian Energy Week Conference.