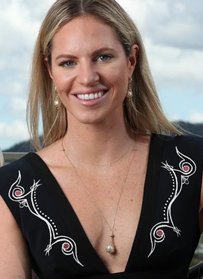 Emily Seebohm OAM appeared at four Olympic Games between 2008 and 2021; and won three Olympic gold medals, five world championship gold medals and seven Commonwealth Games gold medals. She specialised in the backstroke, but has also won medals in the freestyle and individual medley.

In 2008 after winning gold in the 4×100 Medley relay and breaking the World Record Emily was awarded an Order of Australian Medal (OAM).

Seebohm has endometriosis and is an ambassador for the non-profit organisation Endometriosis Australia.

In January 2022 she appeared as a contestant in the 8th season of the Australian version of I'm a Celebrity...Get Me Out of Here!

A passion for Emily outside the pool is working in the media industry, motivational speaking and hosting events. She loves fascinating a room with stories from my time in swimming and sharing the experiences she’s had throughout her career and how these qualities can be used to succeed in all areas of life.