Print
Think of Eric Rush and you think of the All Black and Rugby Sevens' specialist, with explosive speed and outstanding on-field leadership. But Eric Rush, former All-Black, current Rugby Sevens captain, barrister and businessman is also a very... 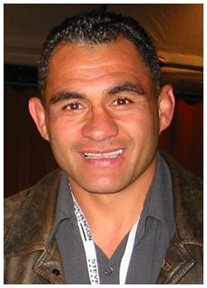 Think of Eric Rush and you think of the All Black and Rugby Sevens' specialist, with explosive speed and outstanding on-field leadership. But Eric Rush, former All-Black, current Rugby Sevens captain, barrister and businessman is also a very entertaining and motivational speaker in his own right. He talks about the parallels of coaching for excellence, in business and sport.
Eric Rush started his rugby career in Auckland as a loose forward, then later transferred to North Harbour. He became a winger in 1992.
Eric was first picked as an All Black in 1992 and played 28 matches, including 9 tests. He made his test debut at the World Cup in South Africa in 1995.
Eric Rush has a distinguished rugby career as Captain of the World Champion New Zealand Sevens team and former All-Black. The New Zealand Sevens team is the most successful Sevens team in the world, winning the inaugural IRB World Sevens Series in 2000 and then again in 2001 and 2002. In addition to that, the team also won back-to-back gold medals at the Commonwealth Games in Kuala Lumpur in 1998 and in Manchester in 2002.
In addition, playing for the NZ Maori Rugby Team, the NZ Touch Team and the Under-17 NZ volleyball team and he won the light heavyweight NZ amateur boxing title as a teenager. You may have caught him in th e 2003 Fight for Life for Youth Suicide on TV3, his Australian opponent will certainly remember him.
Eric has balanced his highly successful rugby career with goals off the field. He completed a Bachelor of Law Degree and was admitted to the bar as a Barrister. He worked for seven years in Corporate Law before devoting himself full-time to his rugby career.
At the same time, he has continued to pursue other business.. Eric is also a director and co-owner of a, popular and successful, corporate development, training company. In this business, Eric is able to take the principles of success he learned on the rugby field, and teach businesses how to apply them in their work. Many organizations are reporting spectacular bottom-line results from these programmes.
Eric has strong leadership skills and is one of New Zealand's most highly rated speakers. He is also author of three successful books, his first book Gold Rush was published in 1999 his second Rushie in 2002, and in November, 2004 he released his third book 'Adrenalin Rush'.
Subscribe
© 2022 Platinum Speakers