A two-time Premiership captain for the Adelaide Crows in 2017 and 2019, Phillips has also won the AFLW Best & Fairest on two occasions, two Players’ Association MVP awards as well as two best-on-ground performances for her Grand Final triumphs.  As a leader, Phillips has instilled a culture of hard-work and professionalism at Adelaide. 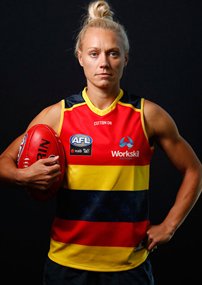 “For 4 years Erin has been an incredible ambassador for PUMA. She is always keen to support the brand where she can, not only making herself available for our shoots and activations, but also coming up with ideas of her own that integrate well with the brand. Whether on field or off field, Erin continues to prove how she aligns with our brand values and puts them on show to our target audience. We hope continue partnering with Erin for many years to come.”

“Erin has been a part of the Chemist Warehouse family for many years as an ambassador and is a professional in every aspect. Erins passion for the brands she works with is evident and she is always willing to go above and beyond to get the best results.”

The daughter of a South Australian football legend and a prodigiously gifted athlete in her own right, Erin rose through local basketball ranks to shine as a point guard for the Adelaide Lightning in the WNBL before being selected in the 2005 WNBA Draft by the Connecticut Sun.

She went on to win WNBA Championships with the Indiana Fever and the Phoenix Mercury before taking on the role of development coach with the Dallas Wings.

Phillips shone just as brightly at international level, proudly representing the Australian Opals for more than a decade, including two Olympic Games, where she won a historic silver medal in 2008 to go with 2006 World Championship Gold and 2014 Bronze.

Away from the footy field and basketball court, Erin and wife Tracy are mums to their three children Brooklyn, Blake and Drew.

Aspiring to forge a legacy as an athlete that is also a leader for change, Phillips is paving the way in pushing boundaries within women’s sport, with issues such as diversity and the courage to innovate and do things your way close to her heart.

She is passionate about health and fitness, family, the welfare of animals and the planet.

A highly sought after speaker and ambassador in the corporate world, Phillips is currently an ambassador for Puma, Chemist Warehouse (INC Protein), Toyota, Metro Homes and the Australian Football League. In 2021 Erin began breakfast radio, hosting the Erin and Soda Show on Mix 102.3 across South Australia.

Gamechanger – The Erin Phillips rise to success in AFLW

Leadership – Instilling a culture of hard work and professionalism

Determination to be the best – Achieving your goals