Print
Fraser Doherty, now 23, set up SuperJam at 14, using his Gran's jam recipes. After selling his produce at farmers' markets and to delicatessens, he developed a method of producing jam 100% from fruit.After setting up... 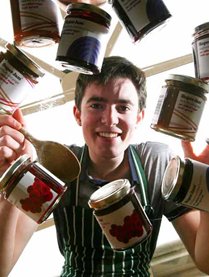 Fraser Doherty travels from International
Fee Range: Up to $5000

Fraser Doherty, now 23, set up SuperJam at 14, using his Gran's jam recipes. After selling his produce at farmers' markets and to delicatessens, he developed a method of producing jam 100% from fruit.


After setting up production, creating a brand and perfecting his recipes, Fraser became the youngest ever supplier to a major supermarket chain when Waitrose launched the range in March 2007. SuperJam now supplies over 2,000 supermarkets around the world (incl. Tesco, Asda Wal-Mart, Morrisons, Sainsbury's, Waitrose) in countries including Australia, Russia, Denmark, Finland and Ireland.
SuperJam is exhibited in the National Museum of Scotland as an 'Iconic Scottish Brand', alongside Irn Bru, Tunnock's and Baxters and Fraser was named 'Global Student Entrepreneur of The Year', the first ever winner from outside North America, one of over twenty awards that the company has received. Gordon Brown, the UK Prime Minister, commended Fraser over dinner at Downing Street, after hearing about his amazing story.
In August 2010, Fraser Doherty launched The SuperJam Cookbook, sharing his jammaking secrets with the world. In April 2011, he launched SuperBusiness; a book about his story and everything he has learned. Both books have since become best sellers, on sale at Waterstones, WHSmith and in supermarkets.
The company invests in running 'SuperJam Tea Parties' for elderly people who live alone, in care homes or in sheltered housing. SuperJam has hosted over 125 events across the UK, with live music, dancing and, of course, scones and SuperJam. Up to 600 guests attend each of these events and they are growing in popularity every month.
Fraser Doherty has also been `Entrepreneur in Residence' at London Metropolitan University since 2010, delivering lectures and speeches on entrepreneurship.