Print
Gavin  Crosisca’s courage was shown when he went public with his story of addiction alongside Eddie McGuire on EMT in September 2012 to give others hope. He continues to share his story and experience regularly as keynote speaker to help destroy the stigma that is attached to someone who is addicted to drugs, alcohol and gambling 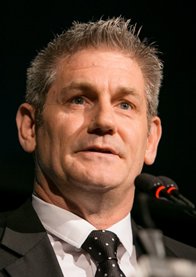 *Excellent- It is great to hear a personal story which has had a very positive outcome and continues to do so.

*So brave to share his own personal story with such depth and frankness kept be spellbound!

*Wow - I knew Gavin's story however to hear him deliver it was an experience I will always remember.  A story that needs to be shared throughout the community and in workplaces - prompted me to complete a lot of actions when I returned to work e.g. fact sheets, toolbox talks, activities for Worksafe week.  It made the problem very real.

We recently invited Gavin Crosisca to speak to our workforce and share his experience on his 28 year battle with addiction.

With an audience of more than 100 people at Loy Yang B Power Station in September 2017 Gavin spoke candidly about his fight with both drug and gambling dependencies and what it had cost him both professionally and personally, from potential coaching jobs, loss of business ventures and valuable quality time spent with his family.

Gavin’s interaction with our employee group was engaging and connected with the audience by answering questions openly and honestly about the personal effects of his addiction.

Feedback from our emplyees has been very positive, generating lengthy discussions on the topic amongst work groups around the brew tables following the session

I, along with many others from the Loy Yang B workforce would recommend hearing Gavin’s personal story and the strategies he put in place for his road to recovery.

Gavin’s presentation on alcohol and social drug use in sport was one before a full audience that included the Tasmanian Minister for Health and numerous leading academics and leaders of not-for profit and community groups from across the country.

His was an outstanding contribution that featured a mix of personal experience and reflection, and moved seamlessly into a broader consideration of the issues and challenges in drug and alcohol dependency. There was universal acclamation of his talk that was extraordinarily engaging and, at times, moving. He clearly has a gift for communication.

It is evident that he has a genuine commitment to his field and a sincere desire to help men and the families facing one of the great scourges of modern life. I would certainly endorse him as an excellent key speaker in this field of interest.

Gavin Crosisca travels from VIC
Fee Range: Up to $5000

Gavin Crosisca from the outside had it all, a successful AFL Premiership player with arguably the most popular sporting organization, Collingwood Football Club. Gavin was also touted as one of the next generation of AFL coaches on his retirement, a beautiful family and opportunities galore. However he had one very dark secret…..Gavin Crosisca was an addict.

After moving to Melbourne from QLD in late 1985 with his mother Kay his AFL career started with Collingwood Football Club in 1986 through a premiership in the U19”s. With Leigh Mathews just arriving and taking on the role as senior coach the task of developing Collingwood into a feared club had begun

Over the next 14 years Gavin played in the historic drought breaking 1990 premiership, played for his state and receive several top 3 finishes in the Collingwood Best and Fairest. Gavin was regarded as a strong leader for Collingwood and was rewarded with deputy vice-captain and vice-captain leadership positons throughout his career. Gavin was known for his long left foot kick providing plenty of run and attack from defence but it was his hardness at the football and his willingness to tackle and pressure the opposition that made him stand out as the ultimate team player.

Retiring at the end of the 2000 season Gavin’s ambition was to become one of the next up and coming senior coaches of the AFL. The only problem was Gavin had played his entire career while addicted to cannabis, alcohol and gambling, a life he kept from everyone, even the players he was involved with throughout his 246 games.

Throughout the years while Gavin balanced AFL Assistant Coaching roles, a husband and a father of 3 children his daily addictions escalated and finally brought him to his knees. For 28 years Gavin was addicted to drugs, alcohol and gambling. This was a life he didn’t understand. Why he continued to self-medicate and ultimately self-destruct with addicted behaviors controlling his every move. Embarrassed and ashamed of the lifestyle he was leading Gavin kept the internal discomfort, depression and anxiety he experienced hidden from everyone around him.

From the depths he faced during a long and painful battle with addiction, to a loving intervention organised by his wife Nicole that placed him in Rehab, Gavin was finally able to find treatment. After spending 4 months in residential addiction treatment Gavin was finally able to start putting the pieces back together slowly reconciling the relationships that meant most to him, his family.

Gavin’s courage was shown when he went public with his story of addiction alongside Eddie McGuire on EMT in September 2012 to give others hope. He continues to share his story and experience regularly as keynote speaker to help destroy the stigma that is attached to someone who is addicted to drugs, alcohol and gambling

Gavin has re-educated in the field of Alcohol and Other Drugs and has completed certified training in the USA as an addiction Interventionist, educating, supporting and coaching families to help their loved ones into treatment. Co-founder of Sober Living Housing Addiction Treatment Centre Gavin now works with people who are struggling with their own addiction and the families that love them providing an opportunity to acquire the skills and knowledge so they too can live free from the bondage of addition.

Gavin’s presentations as keynote speaker are open and honest connecting with the audience as a result of his sincere approach and compelling stories. He offers interesting and educated knowledge from his own experience and also learning’s on the complexities of the disease and its associated behaviours, and then how recovery is possible.

My story of a functioning addict disguised as an AFL Player, coach, husband and father

My fight back to life

The behaviours and characteristics of those struggling with addiction

Men’s health and Well Being