Print
General the Honourable Sir Peter Cosgrove retired from the Army in 2005. Four years earlier, he had been Australian of the Year: “In every respect Peter Cosgrove demonstrated that he is a role model. The man at the top displayed those characteristics we value most as Australians – strength, determination, intelligence, compassion and humour.” 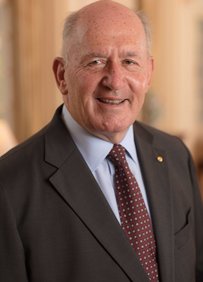 It was a privilege and a delight to have General The Honourable Sir Peter Cosgrove AK, AC (Mil), CVO, MC (Retd.) present at the Australian Automotive Dealer 2019 Convention.  Sir Peter was incredibly generous with his time, gladly walking through our Expo and greeting all our Sponsors and exhibitors with a quick chat and a friendly handshake. His presentation was both thought provoking and informative and he very kindly took questions from our audience at its end.  The feedback we received post session was remarkable with many delegates suggesting that Sir Peter was top of their “bucket list” in regards to meeting him or seeing him speak.  One delegate summed it up perfectly suggesting Sir Peter was the “walking, talking embodiment of the Australian spirit”

General Cosgrove is an iconic Australian in every sense of the word. Having the opportunity to mix socially with our members and their partners the night before his speech, he introduced himself to each person as Peter and mixed freely and comfortably. His speech itself was the ideal blend of personal experience and relevance to the very particular challenges facing our organization globally. Our overseas members were just as impressed by this great Australian leader and his message as I was.

The feedback we received from our audience was very positive. Some of the comments included the following: "words of wisdom from General Cosgrove were invaluable", "change is about people and what people can do outside the normal comfort zone is sometimes amazing. Stretch them and they will perform." "The key take away for me was how much we owe those guys in the armed services. What a fantastic job they do. In the workplace, I learned the value you can get from proper staff selection, training and position description accuracy."

General Peter Cosgrove was the most professional speaker of the conference. His research of the event and industry, understanding of requirements and presence were undeniable.

Australian Statesman……Man of the People

General the Honourable Sir Peter Cosgrove retired from the Army in 2005. Four years earlier, he had been Australian of the Year: “In every respect Peter Cosgrove demonstrated that he is a role model. The man at the top displayed those characteristics we value most as Australians – strength, determination, intelligence, compassion and humour.”

The son of a soldier, he attended Waverley College in Sydney and later graduated from the Royal Military College, Duntroon, in 1968. He was sent to Malaysia as a lieutenant in the 1st Battalion, Royal Australian Regiment. During his next infantry posting in Vietnam he commanded a rifle platoon and was awarded the Military Cross for his performance and leadership during an assault on enemy positions.

With his wife Lynne, the next twenty years saw the family grow to three sons and a wide variety of defence force postings, including extended duty in the UK and India.

In 1999 Peter Cosgrove became a national figure following his appointment as Commander of the International Force East Timor (INTERFET).  He was responsible for overseeing East Timor’s transition to independence during, what was to become, a tense and uncertain period. The International Force rapidly and decisively restored law and order and handed over to another UN force early in 2000. For his leadership of INTERFET he was subsequently advanced to the rank of Companion in the military division of the Order of Australia, and was invested by Her Majesty the Queen at Yarralumla during her visit to Australia early in 2000.

He was soon promoted and made Chief of the Army.  He went on to be promoted again to General and was appointed Chief of the Defence Force.  Peter Cosgrove retired from the Army in July 2005.

Subsequently, he accepted positions on numerous boards, including QANTAS, Cardno and the Australian Rugby Union. He was appointed by the Queensland Government to lead the taskforce rebuilding communities in the Innisfail region following the devastation caused by Cyclone Larry in 2006.  From 2007 to 2012, he chaired the Council of the Australian War Memorial, and served as Chancellor of the Australian Catholic University from 2010 until early 2014.

General Sir Peter Cosgrove was Australian of the of the Year in 2001. His best selling autobiography “My Story” was published in 2006 he delivered the Boyer Lectures series, “A Very Australian Conversation” in 2009.

On 25 March 2014, Prime Minister Tony Abbott announced that General Cosgrove would become a Knight in the Order of Australia when sworn in as Governor General. His Excellency General the Honourable Sir Peter Cosgrove AK MC (Retd) was sworn in as Australia’s 26th Governor General and he served in that role until June 2019.

Sir Peter is an avid sports follower with particular emphasis on Rugby and Cricket. He is the husband to Lynne and they have three sons and two grandchildren.