Print
An outstanding national and international cricketer, Geoff "Henry" Lawson’s career has been described as superb, controversial, brave and colourful.Born in Wagga Wagga in rural NSW, Geoff moved to the city in 1976 to... 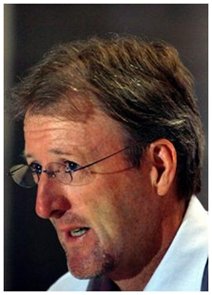 Geoff Lawson travels from NSW
Fee Range: Up to $5000

An outstanding national and international cricketer, Geoff "Henry" Lawson’s career has been described as superb, controversial, brave and colourful.


Born in Wagga Wagga in rural NSW, Geoff moved to the city in 1976 to attend the University of New South Wales. Trained in optometry, Geoff suffered from tunnel vision, red mist and blind spots as much as any good fast bowler.

This tall, lively-paced outswing bowler from the bush came to attention in 1978-79 in the then-approved way, by hitting Geoff Boycott. Winning the “Richie Benaud Player of the Year” award in his first season playing cricket in Sydney, Geoff then followed up the next year by winning the “Young Australian Cricketer of the Year” award.

As World Series cricket dominated our screens, young “Henry” as he was known, named after the Australian bush poet, debuted for the Blues in the Sheffield Shield against Western Australia at the SCG. Since that game, he has taken 395 wickets for NSW (367 Sheffield Shield games), which remains a record. On his retirement he had played the most ever games for the Blues, 115 and was the second highest wicket taker in the whole of Sheffield Shield history. Only the great wrist spinner Clarrie Grimmett had taken more.

“Henry” first represented Australia in 1979, having been called up to India to replace an injured Allan Hurst. Since that initial trip, he has been on 12 tours including England four times, Pakistan twice, India three times, the West Indies, New Zealand and Sri Lanka.

Geoff captained NSW 40 times from midway through the 1988-89 season until his retirement in 1991-92. As captain of New South Wales, Geoff insisted on a "get on or get out" philosophy that not only won the state titles, but also strongly influenced the methods of Mark Taylor and Steve Waugh as test captains.

Geoff remained near to the game as an analyst and spectator, and succeeded Bob Woolmer as Pakistan's coach in July 2007.

Since his retirement from 1st class cricket, Geoff has commentated for ABC Radio, Channel Nine, Foxsports and Foxtel commentary teams and is a member of the popular pay TV cricket panel show At The Wicket. He has written weekly columns for the Sydney Morning Herald, the Sun Herald and feature articles for cricket magazines in Australia, England and India. He is also the only cricketer to have written his autobiography in the past 20 years without a ghost writer.

Geoff Lawson has the rare mix of success at the top level of international sport, academia and business. He has shown tremendous strength of mind and body over 15 years at an elite level of sport, including a miraculous comeback from a crippling back injury. His range of speaking extends from cricket and touring anecdotes to the comparisons with elite sport and business, teamwork, leadership and discipline. As a golfer he participates in corporate golf days both on the course and as a speaker in the clubhouse
Subscribe
© 2022 Platinum Speakers