Print
Aside from his impressive accomplishments on a cricket pitch, former England cricketer Geoff Miller’s greatest attribute was his ability to keep his team mates amused with his hilarious dry northern humour, which he now brings to his speaking... 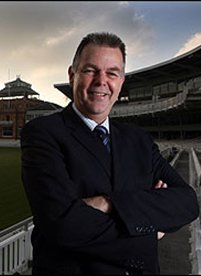 Geoff Miller travels from International
Fee Range: Up to $5000

Aside from his impressive accomplishments on a cricket pitch, former England cricketer Geoff Miller’s greatest attribute was his ability to keep his team mates amused with his hilarious dry northern humour, which he now brings to his speaking engagements.


Having spent twenty years on the professional cricket circuit representing Derbyshire, Essex, Natal and England, travelling to all the major Test playing countries and playing with or against all of the present day greats, to which he freely admints, “I wasn’t one of them”, Geoff recounts a host of anecdotes and stories about himself and his colleagues that he relates in both all-male or mixed company.

In 2008, Geoff was appointed National Selector by the England and Wales Cricket board, having scored an impressive 14,000 runs and taken over 1,000 first class wickets during his tenure on the pitch.

Geoff is in popular demand as an after dinner speaker, having found a new career just as stimulating as facing Michael Holding and Dennis Lillee, or bowling to Viv Richards and Ian Botham, who he roomed with on tour for five years! There must be a story or two in that – and indeed there is.

One of the funniest speakers on the circuit, with a stream of hilarious anecdotes including wild nights in the West Indies, tales of misadventure in Australia and rivalries nearer home, Geoff puts cricket amongst other subject matter, under the microscope in his search for amusement.

His ability to connect with audiences who have no interest in sport, sets him aside from many sporting after dinner speakers, and his timing and self deprecating turn of phrase mark him as a classic raconteur.

“I’ve always thought that both life and the game of cricket are taken far too seriously and it is necessary to see the funny side on all occasions.”
Subscribe
© 2022 Platinum Speakers