Print
Captivating audiences with his unique story and passion, George Halkias is an inspiration to many. Having developed the Big Issue Street Soccer Program, George has been instrumental in helping the homeless use the power of sport to change their lives. 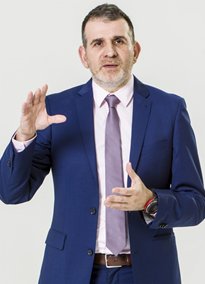 “George was fantastic. He was nice and early, well prepared, very cordial and enthusiastic to meet our CEO, board members and members of our audience. Very professional and most importantly, a lovely person to work with. His presentation hit the mark. His story was very inspirational and his work with the homeless and the Big Issue is outstanding. He is clearly very passionate about helping others, which shone through every moment of his presentation. Thank you so much for approaching George for us. A great choice!"
Genevieve, Inspiro

Of all the staff training and team building workshops that we have facilitated at our company, the Perspective Workshop held by George Halkias was easily the most talked about and memorable event. This is really different! George captivated our people with his unique message and the impact it had on our team was incredible. The workshop resulted in increased morale, improved team interaction, greater energy and a general shift to a more empathic attitude within our organisation. Aside from the value gained personally, it also reflected well on our company image to our team. Thank you George! We will be having more of these workshops in the future for sure. Highly recommended!

George was an absolute pleasure to work with.  I was very moved by the presentation so much so that I am still thinking about it!  I highly recommend George as a speaker and I personally look forward to working with him again in the future.

Dandenong High School was very honoured to receive a presentation by George. Very inspirational for our students.  The students were captivated with his stories.

George Halkias travels from VIC
Fee Range: Up to $5000

Captivating audiences with his unique story and passion, George Halkias is an inspiration to many. Having developed the Big Issue Street Soccer Program, George has been instrumental in helping the homeless use the power of sport to change their lives.

George Halkias is a well respected community figure who has supported vulnerable Australians for almost 20 years.

With post graduate qualifications in psychology, his experience includes managing a state-wide support service for victims of violent crime and training police graduates in the area of victim rights and support.

George is best known for the Big Issue Street Soccer Program which uses soccer to engage and develop homeless and marginalized people.  In this role he has coached and coordinated Australian teams at 6 Homeless World Cup events: Edinburgh 2005, Cape Town 2006, Copenhagen 2007, Melbourne 2008, Milan 2009 and Paris 2011, Poznan 2013, Glasgow 2015, Oslo 2017 and Cardiff 2019.

He was instrumental in successfully bidding for and staging the 2008 Melbourne Homeless World Cup and his role included sourcing corporate sponsorship and acting as the public face of the event.

George’s experience with his team in Cape Town was profiled on the ABC’s Australian Story while his Melbourne campaign was documented by Channel 10.  He has made countless appearances on television and radio and is a brilliant media performer.

Whilst still involved in the Street Soccer Program which has expanded across Australia, George also acts as a leadership coach, athlete mentor and works with prisoners with intellectual disabilities.

A unique speaker, George blends confidence, charisma and passion with insight and knowledge. His sincere and heart-felt presentations make sometimes serious topics stimulating, entertaining and uplifting.  His speeches have a huge impact on his audiences and have the power not only to educate but to inspire and motivate people to achieve their best and also contribute to society. His fun and interesting stories are drawn from his unique work experience and travels captivating those who are fortunate to listen to him.

George also has vast experience as an MC and facilitator working on some large scale sporting, corporate and community events.

The power of sport to build community