Print
Glenn Cooper is the Chairman of Coopers Brewing, Australia’s largest independent brewing company and named as the world’s top family business in 2011. He was until June 2014 the Marketing Director of Coopers. 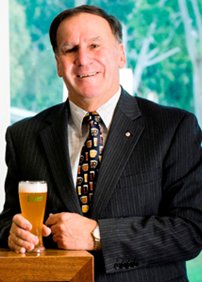 Excellent - Glenn delivered both an entertaining and informative presentation. His story is a good one, and the Philmac team were able to draw a number of parallels between the key messages Glen was emphasising and the way our own business operates. I'd definitely recommend Glenn to other organisations as an entertaining speaker with a terrific story.

Glenn delivered an interesting and entertaining presentation, and was thoroughly enjoyed by all.

Glenn was just the person that we needed for the night and he fitted in with the craziness of our event. I wondered for a while if we would be able to get people to sit down again and listen but he had everyone interested and entranced. His humour certainly helped the situation.

Glenn Cooper’s presentation was very engaging. His family /business story is appropriate for a very wide audience. Glenn’s warmth, humour and professionalism ensures his audience come away entertained and inspired.

Our guests rated him incredibly well in their feedback
Bankwest

Glenn Cooper travels from SA
Fee Range: Up to $5000

Glenn Cooperis the Chairman of Coopers Brewing, Australia’s largest independent brewing company and named as the world’s top family business in 2011. He was until June 2014 the Marketing Director of Coopers. He is also the current Chairman of Australian Made and Australian Grown.

It may be a little known fact, but before turning his hand to the family brewing business, Glenn Cooper had a highly successful career in computers. He also once worked for rival brewer, SA Brewing.

It was not a given that descendants of the Cooper family would come to work for Cooper & Sons, the brewing company founded in 1862 by Thomas Cooper. In fact, Glenn’s father Ken advised him when he was a youngster against joining the company, believing at that stage it was unlikely to survive. Completing his school education at Adelaide’s Prince Alfred College in 1967, Glenn went on to study electronic engineering. It was during this time that he worked at SA Brewing on plant equipment – such was the amicable relationship between the two breweries that SA Brewing didn’t mind having a Cooper in their midst! After completing his engineering studies, Glenn then studied for an Associate Diploma in Business Management and eventually left SA Brewing.

Glenn Cooper entered into the computing field with a company called Anderson Digital Equipment. After two years with this company, Glenn moved to Melbourne to take up his new role of National Distribution Manager. In 1983 Glenn returned to South Australia and set up his own business in computer sales and services. A highly successful venture, his company grew to employ almost 30 staff, with a turnover of more than $3.5 million. It was in 1990 that Glenn was invited to join Coopers Brewery, after he sold the engineering side of his computer business to a French computer giant.

At Coopers, Glenn’s talent and instinct for marketing saw him take up the position of Marketing Director. Today he is also the company’s Executive Chairman. Aided by Glenn’s marketing ingenuity, Coopers has cemented a reputation as an ale, stout and home brew producer of the highest quality, and enjoys excellent sales both within Australia and on the export market. “We’ve built our niche in the market around a reputation for quality and tradition rather than profit-making - I think the public realises that we have immense pride in what we produce, so they know they can trust in the quality of Coopers”. “We just want people to know that our beers are the best quality amber liquid you can find in a bottle.’’

Glenn’s focus at this stage of his brewery career is to continually expand the Coopers range of products both interstate and internationally. After relocating to a new, $40 million state-of-the-art brewery in 2001, Coopers is now the number three brewery in Australia capacity-wise, and is the only remaining family-owned large brewery in Australia. Since relocating, Coopers’ production capacity has increased by 60%, from 25 million litres to 40 million litres (filling 1000 bottles per minute or 60,000 per hour).

•Beating up on the big boys