Glenn Todhunter is a remarkable Australian. After a tragic plane crash left him with both legs amputated to the knee, Glenn defied odds to reclaim his life.  Spending 8 years in training and at the age of 46, Glenn has become the first double amputee to fly for the Royal Flying Doctor Service (RFDS). 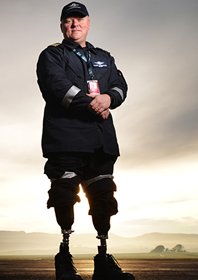 Inspirational. Brilliant speaker, brilliant story! 2nd time I have seen this presentation however still as good as the first. Great presentation, could listen to Glenn for hours.

Glenn recently spoke at a major conference for our company. His motivating and inspirational presentation conformed perfectly with the targets we had set for the conference. Glenn connected with his audience at a personal level. Many of our staff members felt they could relate to his story, and some report their outlook has changed since. I would recommend Glenn to anyone seeking an enthusiastic and interesting speaker.

Glenn Todhunter travels from TAS
Fee Range: Up to $5000

On September 22 1995, Major Glenn Todhunter found himself trapped in the wreckage of his aircraft after it had crashed heavily from 200ft during a training flight.  He almost died.

After several days in intensive care on life support, his journey back to health required amputation of both his legs below the knee and two months in hospital.  What followed over the next eight years is a landmark journey rebuilding his life learning to walk, drive and fly again

After having been told he would never fly again for Defence with a disability, he succeeded and in doing so became the first and only amputee aviator to have served in the history of the Australian Defence Force. To date Glenn has flown both rotary and fixed wing aircraft for the Australian Army.

In acknowledgement of his achievements, Glenn is the first non-doctor to be awarded lifetime honorary membership to the Australasian Society of Aerospace Medicine.  He has featured on the ABC’s Australian Story, and was selected as one of four finalists for the 2006 Suncorp Queenslander of the Year. Glenn is now flying for the Royal Flying Doctor Service based in Launceston, and enjoys being part of providing a vital aeromedical service to the people of Tasmania.

Today Glenn has flown both rotary and fixed wing aircraft for the Australian Army. After having been told he would never fly again in the Army with a disability, using determination and tenacity he succeeded in becoming the first and only amputee aviator in the history of the Australian Defence Force.

As an inspirational speaker, Glenn Todhunter’s unique story incorporates aspects of the next eight years rebuilding a life in which he learns to walk, drive and fly again. Glenn speaks about the human side of his journey, and touches on managing fear, the realm of human achievement and living a life you love.

Glenn enjoys visiting schools to help raise awareness of disability as a mainstream issue, and he has been an active member of various Disabilities and Support Groups.

Glenn’s powerful presentation style will inspire many audiences, and his lessons learnt are ones you won't want to miss!