The founder of the Buy from the Bush campaign, she has started conversations, lifted spirits, created jobs and saved businesses that may otherwise have failed due to devastating drought and bushfires.  An inspiring and passionate speaker, she talks about the power of community-driven change and how to start up a business and drive its sustainable success. 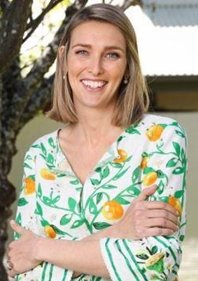 Grace Brennan is an absolute inspiration. She is incredibly insightful, eloquent and most importantly, relatable. Every word that seems to so effortlessly fall from her mouth is a pearl of wisdom that needs to be etched on your brain because it is so valuable. Grace is smart, funny and engaging.

Grace Brennan has been instrumental in uniting Australia's communities in the city and country. The founder of the Buy from the Bush campaign, she has started conversations, lifted spirits, created jobs and saved businesses that may otherwise have failed due to devastating drought and bushfires.

Grace Brennan's significant contribution to Australian communities was recognised when she was asked to deliver the 2020 Australia Day speech. An inspiring and passionate speaker, she talks about the power of community-driven change and how to start up a business and drive its sustainable success.

Raised in Sydney, Grace Brennan married a farmer, moved to Warren in NSW in the late 2000s, and immediately learnt about the impact that devastating drought was having on rural communities. With a background in community development, she quickly recognised the need to attract cashflow, create work and allow people in rural communities to feel visible and valued.

In response to community need, Grace found a solution... ten years and almost four children later, she started Buy from the Bush with a small presence online.

Very quickly, the #buyfromthebush campaign took flight and within the first six weeks had generated $2.6 million of revenue for businesses featured on its social pages. In that period, 25 jobs were created in rural communities facing drought because of increased sales. More than $320,000 was spent at local Australia Post franchises benefitting small businesses in small towns. Businesses reported an average revenue increase of 660% on the same period last year and an average increase in visits to their websites of over 1,000%. All of this was achieved before the busy Christmas period of December. The social site continues to grow with businesses adding the #buyfromthebush hashtag to their social media posts, enabling them to connect with hundreds of thousands of consumers wanting to support bush business.

When Buy from the Bush launched its website, it attracted 54,000 unique visitors in the first eight days. It became the highest-ranking search term in NSW and the second highest ranking nationally. Australia Post reported a 40% increase in parcel postage in regional areas.

Her story of marrying a farmer and moving to Warren, becoming a mother, then starting up Buy from the Bush is truly inspirational. Interwoven within her story are key messages about how individuals, groups, and communities can pull together to support each other, and how sustainable businesses, within the context of a global trend toward meaningful consumption, can be built.

Buy from the Bush – The journey and success

The power of community-driven change

How to start up a business and drive its sustainable success