Greg Ward; Professional MC, keynote speaker, television presenter, voice artist, and musical entertainer of long-standing is a sure-fire bet for your next event… A man of boundless ‘enthusiasms’, Greg is insatiably curious about the world around him, which comes to the fore in his strong interests in multiple sectors and industries where he is often found hosting and appearing at multiple-day events in our region and further afield. 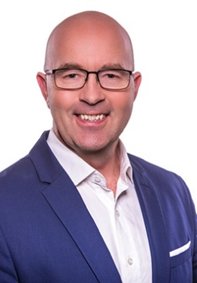 This cleverly put together show was fast, funny and highly entertaining. Greg's performance was outstanding as he was able to thread elements of the conference into the show. His ability to think on-the-spot and his musical talent is extraordinary. Most of all, it was obvious he was enjoying what he was doing. Greg got the big thumbs-up from our delegates, and I can safely say that he made the evening our most successful ever..."

Almost Elton is a show stopper and a guaranteed way to wow a crowd. I heard many people comment “who needs the real Elton!”

Greg Ward; Professional MC, keynote speaker, television presenter, voice artist, and musical entertainer of long-standing is a sure-fire bet for your next event…

His working career began in design and sales, while at the same time he was building an enviable musical and entertainment skill set, culminating in being signed to a British independent label in the 1990s.

A multi-instrumentalist and vocalist, Greg continued his passion for discovery, leading him to embrace opera, musical theatre, acting and improvisation and much more, bringing these skills and experience to his wide range of corporate and association clients.

As an actor, Greg has appeared in international shows such as the US Starz channel ‘Spartacus’, and regularly provides voices for the international Power Ranger franchise.  Whether recorded or live, Greg is completely at home behind a mic, in front of the camera, at the lectern or gracing stages around the globe.

A man of boundless ‘enthusiasms’, Greg is insatiably curious about the world around him, which comes to the fore in his strong interests in multiple sectors and industries where he is often found hosting and appearing at multiple-day events in our region and further afield.

International conference and event opportunities are a strong draw card for him, and with communication being the key part of his work, Greg prides himself on his grasp of many languages, speaking German, Spanish, basic French and many others, alongside his native English – which endears him to his clients, particularly the event support elements and suppliers.

Greg says “…clear and accurate communication is a major key to success – and it’s important to reflect the language and culture of the host nation in my work, bringing us closer and closer to ensure the client and their event is the star of the occasion.”

With a lifetime of experience, including guide-diving in Turkey, a 4-year career as a professional soldier and over 20 years at the frontline of MC’ing, speaking and performing at conferences and events worldwide, Greg is the sure, smooth, well-prepared host and facilitator that your next event richly deserves.

Choose Greg Ward – his goals are your goals.

The only way is UP! - Inspire your delegates with this compelling and learning-packed address focusing on Greg's exceptional business growth from rocky start-up to Westpac Business Awards finalist.

The BUSINESS of Show Business - Who says business and creativity don't mix? Greg distills the key factors leading to his success as a top-rating MC, speaker and performer and translates the learning for YOUR business. An inspirational business wake-up call.

High Performance Teams - From his background in the NZ Military, through his role as Project Team Leader at PriceWaterhouseCoopers and into the creative realm of professional theatre production, the one overriding factor in all of Greg's successful ventures has been the team approach.

Curtain UP! - Condensing a lifetime of sales, public-speaking and performance experience on stage and behind the lectern, Greg arms you with the tools to present with passion and emotion - and have your message heard.

Off the Cuff - Combining top-end musical improvisation skills with witty audience interaction and set comedy pieces, this show has everything!

Almost Elton - Greg Ward sings and plays live in this comedy tribute to the king of pop, Sir Elton John. It's a 40-minute after-dinner show that has guests wondering, "Is that REALLY Elton?"

Tailored Event Options - Greg is a creative whizz-kid. Talk to him about your event and he'll work with to create a memorable and specific package, just for you.