Hawk Vagg wants to teach and inspire people about ‘attitude’ and making ‘safety’ a normal part of everyday work.   Today, Hawk travels Australia speaking to community groups and workers across all industries.   Hawk tells his moving story with candour and humour. He reflects on his injury and his past as a strong resilient “man of the bush” to his current reality and his considerable achievements in between. 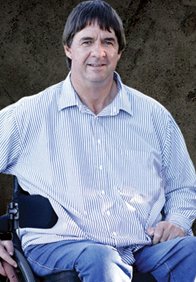 The guys are still talking about your presentation.. it made a real impact on everyone. We are making a poster and just wanted to check with you if it was ok to use your “mantra” — “She’ll be right mate, But… what if I am wrong”

Hawk shared his story with the Moorvale team and left everyone with a powerful message to stop and think about the choices you make and the consequences they could have on you and the people around you.

I would like to take this opportunity to express my gratitude and thanks for your heart-felt and very personal presentations here for us at Toowoomba Regional Council. I have received very positive feedback from attendees at both sessions you delivered last Wednesday. Overall, I took away some personal reflections and ‘timely reminders’ to remember about some of the decisions we make in life, especially around keeping safe both personally and for those around us.

In short — bloody awesome Hawk was fantastic. He was extremely professional but also down to earth and realistic. They presented and pitched the session at exactly the right level for the audience. I am sure Hawk was able to “turn on a few lights” as I like to say. I know that some of the audience, particularly the younger workers, found it confronting initially but with Hawk’s style and honesty everyone left the room with a stronger resolve to take the actions they need to in their work fronts.

Hawk Vagg was 38 years old with a wife and four boys aged eleven, nine, three and two when he became a quadriplegic. In December 1998 Hawk was standing on a tractor’s front-end loader on a farm near Jerilderie NSW, elevated so he could cut down the higher branches of a huge river red gum which had toppled in a recent storm; as he chain sawed off the last big trunk. He miscalculated the way it would fall and it knocked him off the tractor. Hawk plunged onto a steep river bank - a fall that changed his life forever.

Hawk’s journey from devastation and despair back to living a full and productive life taught him a lot about himself and life in general. He realised that life is all about ‘attitude’ – controlling your attitude.

He also learnt that when life deals you tough cards, that it doesn’t just impact you, but can also be devastating for all the people around you. Hawk learnt during his recovery that ‘it wasn’t just about him’, and he was inspired to share his story and teach people about ‘attitude, safety and culture’ so that other families don’t have to go through the type of pain that impacted his family.

Hawk tells his moving story with candour and humour. He reflects on his injury and his past as a strong resilient “man of the bush” to his current reality and his considerable achievements in between.

He covers the long rehabilitation process; how family and friends adapted to his injury; the kindness of communities; becoming independent with his personal care; the fight for compensation; building a wheelchair friendly house; making noise as a injury advocate; the frustrations of looking for work; the sex life of a quadriplegic; the upside of learning to fly before his accident; the downside of flying after; the upside of fatherhood from wheelchair; the breakdown of his marriage and finding love again; his belief in the importance of attitude and starting a business as a motivational speaker.

Hawk doesn’t want to become a Health and Safety trainer – That’s for others to do, he says. Hawk wants to teach and inspire people about ‘attitude’ and making ‘safety’ a normal part of everyday work.

Today, Hawk travels Australia by air or in his specially converted van from his home in Toowoomba, Queensland, speaking to community groups and workers across all industries. That’s how he became - A Safety Speaker.