Print
Holly Ransom is a globally renowned content curator, powerful speaker and master questioner.   Named one of Australia’s 100 Most Influential Women by the Australian Financial Review, she has delivered a Peace Charter to the Dalai Lama, was Sir Richard Branson’s nominee for Wired Magazine’s ‘Smart List’ of Future Game Changers to watch and was awarded the US Embassy’s Eleanor Roosevelt Award for Leadership Excellence in 2019. 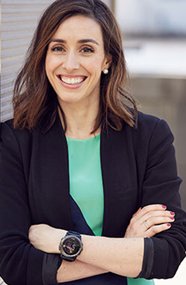 “Holly is well known as one of Western Australia’s youngest movers and shakers. Her presentation focused on recent changes in social processes of innovation, such as open source methods and techniques and social purpose innovation, such as microcredit, as well as forecasting the next frontier of advances in social impact. Holly’s talk was well received by our members and generated a number of questions from interested members. We can highly recommend Holly as a public speaker.”

“After being blown away with Holly’s presentation at the Tipping Point series in Melbourne, I invited her to present to our top talent at NAB. Holly’s presentation was incredibly inspirational and in line with our own business strategy, she really made a point of challenging the status quo. She engaged everyone from our senior management to our up-and-coming employees. This was a presentation that was talked about for weeks afterwards. I’d highly recommend Holly as an engaging and informative speaker.”

“Holly Ransom is a superstar! Holly spoke to more than 200 Melbourne business leaders at our sold out Tipping Point event and her unique perspective, insightful observations and passion for making a difference captivated the audience. We have never had more follow-up enquiries after an event than after our event with Holly. As Charles Macek, Wesfarmers Board Director and our event MC said, ‘you’re watching a future leader of this country in action’. If you want a speaker who your audience will be talking about for weeks after an event then look no further than Holly.”

“Holly was recommend to me as a 20 year old dynamo passionate about women and the world, who was also an excellent speaker for her age. We are always keen to help raise the profile of up and coming leaders so I asked Holly to speak and moderate a high level panel at the 11th annual Sustaining Women in Business Conference (www.swb.com.au). I had heard her maturity was beyond her years, but was not prepared for the depth of her presentation in terms of her passion, knowledge and way that she engaged and inspired the audience. She truly blew us all away and since that day has been a regular at the event, where she has spoken in a range of capacities and consistently received incredible feedback. I would not hesitate to recommend Holly as a speaker and thought leader and truly believe we have only scratched the surface of what this incredible young women will achieve”.

“A presentation that starts and ends with a standing ovation and can maintain the energy and engagement of an audience of 500 of America’s most talented high school and college students throughout is no mean feat to achieve! When Holly presented for us at the LEAP Foundation Los Angeles her high-energy and informative session delivered exactly that. Holly commands the stage with such a presence and gains instant respect from her audience for her track record of achievement- she walks the walk of what she talks about. Her ability to break topics like goal-setting and leadership down in to pragmatic steps meant students had practical take-aways.”

Holly Ransom is a globally renowned content curator, powerful speaker and master questioner with the belief that if you walk past it, you tell the world it’s okay. Named one of Australia’s 100 Most Influential Women by the Australian Financial Review, she has delivered a Peace Charter to the Dalai Lama, was Sir Richard Branson’s nominee for Wired Magazine’s ‘Smart List’ of Future Game Changers to watch and was awarded the US Embassy’s Eleanor Roosevelt Award for Leadership Excellence in 2019.

Having interviewed the likes of Barack Obama, Malcolm Gladwell, Richard Branson, Billie Jean-King, Condoleezza Rice, Nobel Prize Winner Muhammad Yunus and the world's first humanoid robot Sophia, Holly fights complexity with curiosity, apathy with empowerment and fear with fact. As a Fulbright scholar and Harvard Kennedy School Class of ’21 fellow, Holly is a recipient of the prestigious Anne Wexler Public Policy Scholarship, allowing her to action social and economic inclusion by connecting people with the decisions that affect their lives.

Soon to release her book The Leading Edge, Holly helps people harness their own potential to lead by asking better questions, thinking beyond biased answers and building collective momentum for change. In The Leading Edge, Holly brings the real-world leadership lessons of so many diverse thinkers and pioneers she’s met to the fore.

Holly was identified early as a dynamic thought leader, asked to Co- Chair the G20 Youth Summit in 2014, the United Nations Coalition of Young Women Entrepreneurs in 2016, and becoming the youngest Director ever to be appointed to an Australian Football Club, the mighty Port Adelaide. Holly’s podcast ‘Coffee Pods’ was named in the top ten business podcasts to listen to by the Sydney Morning Herald in 2018, and Holly has been recognised as a LinkedIn Influencer and a credible content producer by the Australian Institute of Company Directors.

Herself an accomplished company director, Holly has compressed a power-packed career into a decade, spanning corporate, non-profit and public sectors. As founder and CEO of consulting firm Emergent, Holly has led real-world results with clients such as P&G, Microsoft, Virgin, Cisco and KPMG.

Holly has also been a regular on the likes of  The Drum and QandA. As a proud champion for diversity and inclusion, Holly is Chair of Pride Cup Australia, a non-profit organisation (and movement) devoted to challenging LGBTI+ discrimination within sporting clubs - and make them welcoming and supportive environments for LGBTI participation and fans.

A two-time ironwoman, Holly loves to cook, dance and sing... despite her complete lack of talent at all three.

Holly is not only a master of ceremonies but a master of content. For the full ‘Holly’ effect, engage her to curate the content for your overall event and then watch her pull it all together seamlessly onstage as MC.

As a moderator Holly is able to synthesize complex information on the spot, weaving together different voices and views to enable inclusive debate. Holly elevates conversation accessibly across sectors, topics, generations and cultures.

Leadership as a mindset

Empower your people to harness purpose as a personal and collective motivator. Empower your teams to expand their sphere of influence, hone their risk appetite, and reframe their role in greater business success. As Gandhi put it, let’s teach your people to do what they can, with what they have, from where they are. Starting today.

Purpose: Knowing your why is one thing, knowing their why is everything.

Risk: Pre-mortems, black boxes, asking the questions without answers. Build your ability to bounce back from failure while looking risk in the eye.

Make your mind up: Framing your choices and diversifying your dice in the age of etoxic information.

Find your edge, own your narrative: No one does you, like you. Be your difference, it’s your most valuable asset.

Methods for thriving in uncertainty

Leadership is no longer about individual strength, but group strength. What does leadership look like today, when we’re facing complexity and challenges in every direction? Activate a distributed leadership model with the methods to help people operate out of their comfort zone, model inclusive culture, and sharpen their critical curiosity for the unknown.

Energy over time: As we build our stamina for change, managing energy rather than time becomes crucial.

Leading at the cutting edge: Getting comfortable being uncomfortable and starting before you’re ready with the “yes, and” improvisation method.

Critical curiosity: When opinions are currency and fake news is everywhere, how can we train ourselves to do the work required to hold an opinion?

Design for inclusion: Moving from polarisation to progress.

Owning the will and the way

The mastery of leadership lies within unlearning as quickly as we learn, thinking collectively and acting in the moment backed with the discipline of preparation and planning. How do we help our leaders sustain their own energy as well as momentum for change?

Unlearn, learn and relearn: growing others to grow ourselves when leadership requires a circular growth mindset.

Preparation discipline: Get your goals in place and know when to get out or your own way.

Sustainable momentum: Bio empathy and the ability to work “on and in”.

E-Sports, Gaming and Social Media - How they’re Changing Connection, Commerce and our Neurology

Leadership is an Inside Job - Developing a new era of leaders

Leading Change: From 'Why' to 'How'