Under Mr Kennett’s premiership, Victoria earned the reputation of being Australia's most reformist state, implementing reforms to the Victorian public service, leading Australia in the privatisation of public utilities, reducing the State's debt from $33 billion to $5.5 billion, reinvigorating the economy, reinstating confidence amongst the Victorian community, and taking the state to the world. 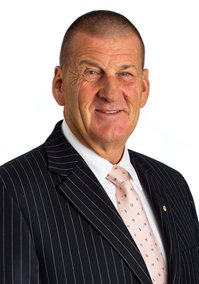 Jeff was superb. He was challenging and relevant to our audience. He prepared well for the talk and was charming and generous. He arrived whilst our Global Chairman was giving the opening address and listened, asked questions and made notes. He wove nuggets of information from the previous speaker's talk to enhance the talk.

Jeff is very easy going and pleasant to work with. He crafted his speech based on our brief and met our expectations. The audience loved both his political commentary and thoughts on wellbeing.

“A wonderful and engaging speaker, Mr Kennett speaks with passion and warmth. Excellent”

“Thank you from the team at CRT for joining us at the recent National Conference in Perth. Your presentation inspired much debate and interest amongst our delegates. Our delegates gave you very high marks in our post-Conference survey and we very much appreciate your contribution to the success of our Conference.”

“Jeff was sensational in his delivery of the Keynote address.  Delegates were very excited at the prospect of hearing Jeff speak, particularly in such challenging times.  He was visionary, urbane, spoke superbly on topic and was a pleasure to work with”.

The Hon. Jeff Kennett AC entered the Victorian State Parliament in 1977. He served in the Liberal Government in the early 1980's as Minister for Housing, Minister for Immigration and Ethnic Affairs and Minister Responsible for Aboriginal Affairs and was elected Leader of the Opposition in October 1982.

Mr Kennett was an Officer in the Royal Australian Regiment, serving at home and overseas.

As a politician he entered the Victorian State Parliament in 1976 and was elected Leader of the Opposition in 1982. Under his leadership, the Liberal-National Party coalition was elected to government in 1992, and returned to office in 1996.

Under Mr Kennett’s premiership, Victoria earned the reputation of being Australia's most reformist state, implementing reforms to the Victorian public service, leading Australia in the privatisation of public utilities, reducing the State's debt from $33 billion to $5.5 billion, reinvigorating the economy, reinstating confidence amongst the Victorian community, and taking the state to the world.

Mr Kennett is the founding Chairman of beyondblue, the national depression and anxiety initiative, which is supported on a bipartisan basis throughout the country and which has greatly reduced the stigma attached to mental illness.  He is also Chairman of The Torch, a program assisting incarcerated Indigenous men and women.

Mr Kennett continues an active commercial life where he is currently a Director of Equity Trustees Limited and a Director of Seven West Media Ltd.

Mr Kennett is Patron of The Royal District Nursing Service and Sovereign Hill Ballarat, as well as being associated with many other community organisations.

Mr Kennett was President of the Hawthorn Football Club from 2005-2011, during which time Hawthorn played four finals series, won their first Premiership in 16 years and doubled their membership base.


In 2005 Mr Kennett was awarded the Companion of the Order of Australia.

Mr Kennett speaks on a broad range of topics including those below..

Australia in the 21st Century and Beyond; our future, potential growth areas, the shape of society

The challenges ahead for Australia as a nation

The role of Government in leading debate on social issues