Print
Born in Lagos, Nigeria to an Australian mother and an English father, James' family migrated to Australia in the early 60's, settling in Victoria's Mornington Peninsula area. Leaving law school to study drama at the Victorian... 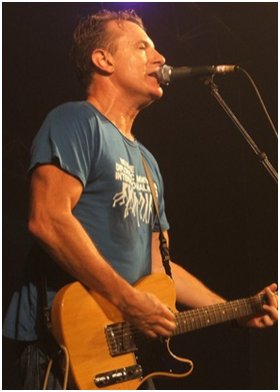 Born in Lagos, Nigeria to an Australian mother and an English father, James' family migrated to Australia in the early 60's, settling in Victoria's Mornington Peninsula area. Leaving law school to study drama at the Victorian College of the Arts, James Reyne’s musical career initially took hold in the early 80's when he and some friends formed the band Australian Crawl.
With his prolific song writing and unique vocal style, James Reyne led Australian Crawl to the top of the Australian music scene.


The band's popularity skyrocketed with all of their albums achieving top 5 status, winning numerous band, music and video awards, while James won hurrahs for the best male vocalist for 3 consecutive years. He also won acclaim as a songwriter - the song "RECKLESS" earning him a place in the league of homegrown greats.
Australian Crawl achieved a success that assured them a place in Australian music history.
After the band split in 1986, James spent some time in the United States and Europe, returning to Australia in 1988.
James Reyne toured Australia during 2005 – 2006, all the while writing and recording. For those of you with Children, you may have seen two Children's book / CD in the stores where James' recordings come to life courtesy of Wendy Straw's charming illustrations. The first two books were Mr Froggy & Save The Bones For Henry Jones. The third book in this series, The Little Engine will be released in June 2007. James also co-hosted (with Tracee Hutchison) DIG TV for ABC 2 during this period.
2007 sees the release of James Reyne’s latest album. "EVERY MAN A KING" closes a 30-year circle since James first led Australian Crawl into the front line of the Oz rock boom. His eye and pen grew sharper through a platinum-lined solo career, but never have his wit and poignancy been on more consistently solid musical ground than they are here, on his eighth solo album.
Subscribe
© 2022 Platinum Speakers