Print
An inspirational and motivational speaker, Jamila speaks with honesty, humour and dignity. She uses her story to deliver memorable messages about the importance of dreaming big, the keys to effective leadership amidst change, and the crucial role of resilience and positivity. 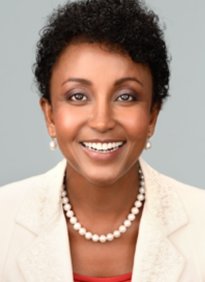 Some messages in life simply have to be heard. You could have literally heard a pin drop. We were spell bound hearing about her journey that has led her from her days growing up in Ethiopia, to Eritrea then Kenya and ultimately to Australia. It is a remarkable story of achievement in itself and a testament to the human spirit that Jamila has not only survived but seemly thrived from such an unimaginable challenge to simply stay alive. Then to hear how she has made it in the world of IT&C and to be instrumental in helping shape some of the most prominent organisations in our business community only adds to the respect one feels for Jamila and her accomplishments. I have no hesitation in recommending Jamila as an inspirational and inspiring speaker.

Jamila is an inspirational woman with a story that must be heard to be believed. Jamila spoke to our group of young leaders and the audience was spellbound. Starting in Australia without any formal education and without knowing the language and culture, Jamila went on to lead some of the most recognisable organisations in the world. Her incredible story of resilience, hard work, determination, and perseverance offers powerful insights into what brings success in life. Notwithstanding how tough her life has been, Jamila has a warm and wonderful nature that makes her instantly likeable. I highly recommend Jamila for her ability to inspire and move people.

Jamila brings a sense of humour, charm, humility and a fierce intellect to tell an amazing story from her birth in a nomadic tribe in Somalia to roles as the global CIO for vast multinationals. Jamila presented to a large gathering of our clients and you could hear a pin drop as she spoke. Hers is an inspirational story of perseverance and triumph over adversity in the face of mortal danger in Mogadishu and Mombassa, and more latterly in the boardrooms of Australia and Europe. She is articulate, warm, intelligent, and an amazing testament to the power of never giving up. When we talk about the difficulties of creating an inclusive environment in our workplaces we think of things like gender, religion and ethnicity – the experiences Jamila had on all three fronts in her early days in the ghettos of Mombassa inform her approach to working in the male dominated world of corporate IT and we can all learn much from her

Jamila Gordon is the founder and CEO of Lumachain, a technology platform that disrupts traditional enterprise supply chains using blockchain, the Internet of Things and artificial intelligence to provide transparency, safety and trust throughout the supply chain. She is also a non-executive director of Jayride, and an advisory board member of VentureCrowd.

One of Australia's most respected IT and digital leaders, Jamila has a deep understanding of the corporate world from both a technology and business perspective. Having held leadership roles in businesses in Australia and globally, she has an extensive network spanning the business, technology, start-up and venture capital worlds.

An inspirational and motivational speaker, Jamila speaks with honesty, humour and dignity. She uses her story to deliver memorable messages about the importance of dreaming big, the keys to effective leadership amidst change, and the crucial role of resilience and positivity.

Jamila Gordon's background includes roles as Group Chief Information Officer of Qantas Airways and Leighton Holdings/CIMIC. Prior to this, as a global executive with IBM based in Europe, she led some of IBM's largest transformational 'mega-deals' with Solectron Manufacturing. Jamila has also worked with AXA Insurance and ABN AMRO Bank.

Jamila's professional success is made more remarkable by her personal story. She arrived in Australia at the age of 18 having escaped the Somali civil war alone and being virtually homeless in Kenya. Jamila set about learning English and then studied IT at La Trobe University, before commencing a career that has taken her around the world. She served on the Board of La Trobe University for five years.

When Jamila's father sent her to Kenya at the age of 18, he told her: "I'm sending you away for your safety. Wherever you end up, the things that will allow you to survive and thrive are: make yourself useful, be the best version of yourself and grow big dreams!" These principles have guided her life ever since.

The power of dreams and having the courage to pursue them - Jamila's personal goals have constantly expanded and grown. As a young girl, her dream was simply to avoid being married off at the age of thirteen, as most of her cousins had been. In Kenya, her dream was simply to survive. Today she is living her greatest dream yet: steering the rapid growth and global expansion of a best-in-class publicly-listed tech & digital businesses as well as unlisted startups.

Leading effectively through challenge and complexity - Jamila has built her career on her capacity to bring diverse groups together and drive transformational change, at scale. She shares the leadership principles that have served her well.

The role of resilience and positivity - Jamila's has faced major challenges throughout her life, yet she has always found that the greatest adversity also brings the seed of opportunity. It is the developable capacity to bounce back and remain positive that is crucial to success.