Print
2017 Victorian Young Australian of the Year Jason Ball is a speaker, writer and educator and has been labeled a 'disruptor' and one of the 'most influential Melburnians'. A passionate community advocate, he was the catalyst behind the world's first AFL Pride Game and is highly regarded for his work in support of LGBTI equality and mental health. 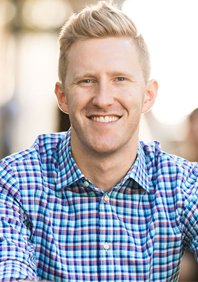 Jason had the audience highly engaged in his story, in his experience and in his beautifully articulated broader commentary on diversity and the importance of being true to ourselves and inclusive of others. Our event was significantly enhanced by Jason’s presence.

Jason’s message of empowerment was inspiring, insightful and further built our momentum for LGBTI inclusion at work

Jason was exceptional. He spent over an hour with young people before the event started and they were overawed, thrilled and greatly helped by him in myriad ways. His presentation was superb. Constant rounds of applause throughout and many people on their feet for the final ovation

Jason you are an amazing person who has really connected with our students. Today you changed the world a little bit and made it a much better place. We are so honoured to have met you. I can’t thank you enough. You are an inspiration.

“Jason’s ability to engage and inspire is second to none. One cannot help but be moved by his compelling journey to take up the mantle and advocate for inclusivity, empower marginalised societal groups and fight for LGBTI rights. ”

Jason responded in a thoughtful and generous way to the needs of our students. His presentation had a big impact, empowering students to take action to make positive change. We’d recommend Jason to any school interested in advancing discussions about how best to support student diversity and wellbeing.

Jason Ball travels from VIC
Fee Range: Up to $5000

2017 Victorian Young Australian of the Year Jason Ball is a speaker, writer and educator and has been labeled a 'disruptor' and one of the 'most influential Melburnians'. A passionate community advocate, he was the catalyst behind the world's first AFL Pride Game and is highly regarded for his work in support of LGBTI equality and mental health.

An insightful and resolute keynote speaker, Jason Ball draws on his own experiences and those of the broader community to empower his audiences - whether youth, corporate or community groups - to take action for positive change.

Since coming out in 2012, Jason has become a national figurehead on combatting homophobia in sport and highlighting the damaging impact of homophobia on the mental health and wellbeing of the LGBTIQ community.

Jason’s advocacy was the driving force behind the AFL’s first Pride Game played between St Kilda and Sydney in 2016, and in 2018 he co-founded Pride Cup Australia, a non-profit organisation that works with all levels of sport to create pride activations and deliver education to increase LGBTIQ visibility and engagement.

Jason has appeared widely in the media including on The Project, Sunrise, The Morning Show, FoxFooty, The Age, The Herald Sun, 774 Melbourne, 3AW, ABC Radio National, SEN, triple j and VICE Magazine.

In 2012 Jason was included in The Age’s Top 100 Most Influential Melburnians and was featured among The Advocate’s Top 25 Most Notable Comings Out of 2012. He was named LGBTI Sports Person of the Year in the 2015 GLOBE Community Awards and was a finalist for LGBTI Person of the Year at the same event.

Pop culture and news website Junkee included Jason in ‘The Disruptors’, their list of thirty people “changing the game for young Australia” and Men’s Style Magazine included Jason in their ‘Men of Influence’ list for 2017. Most recently, Jason was presented with the Out Role Model Award for Sport in the 2017 Australian LGBTI Inclusion Awards hosted by Pride In Diversity.

Jason has also been a champion of mental health reform in his role as government relations officer for the Young and Well Cooperative Research Centre where he has been at the coalface of change, harnessing new technologies to support children, teens and young adults struggling with mental ill health. He regularly visited Canberra in this role, working with politicians from all sides of politics to invest more in this chronically under-funded sector.

In 2016 and 2019 Jason stood as a candidate for the Greens in the Federal seat of Higgins, where he campaigned for strong action on climate change, compassion for people seeking assylum and LGBTIQ equality.