Print
In the live comedy arena, Jason is one of Australia’s most experienced performers, as both a feature comedy act and MC/Host, seeing him nominated twice for Best Stand-up comedian in Australia. Jason’s squeaky clean generic material is suited to all ages and walks of life through to his more rough and tumble R rated shows never disappoint and leave the audience in stitches. 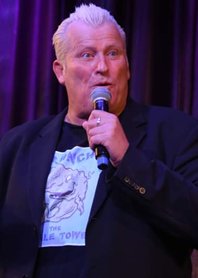 Jason 'Rash' Ryder is a consummate performer, with decades of experience as a stand up comedian and presenter. Jason, who performs as 'Rash Ryder', can be guaranteed to generate a continuous stream of laughter from any audience, be it small, medium or large.

His grasp of history, day to day life, circumstances, situations, people of fame and infamy, suburban heroics and what is good and bad about society; provides a treasure trove of hilarious one-liners and story telling. He can tone up or down his monologues and one-off jokes to suit the occasion and gender mix.I can fully recommend him as a performer who delivers.

‘Rash’ recently performed for us at our end of year Christmas function. With a number of present and former rugby league players and supporters in attendance, ‘Rash’ smashed them with his down-to-earth comedy routine and very funny one-liners.

He was extremely professional in his approach arriving well before he was due on stage and had the audience ‘in stiches’ from his first gag until he finished a hilarious and polished performance 35 minutes later.

I would highly recommend Jason for any corporate, sporting club or charity organisation event if you’re looking for truly entertaining, original comedy act.

‘Rash’ Ryder is the man.

My guests were blown away by how funny and entertaining he was. I was extremely pleased with how professional he was keeping a rowdy crowd informed, entertained and above all happy. Nothing was a problem. I thoroughly recommend anyone looking to add that extra good feeling to their event to give Rash a call.

Over a period of more than 3 and a half decades, Jason ‘Rash’ Ryder has amassed a huge catalogue of live comedy, film, television and radio credits. With over 50 appearances in film and television, including guest spots on some of Australia’s most popular screen productions as well as music videos.

In the live comedy arena, Jason is one of Australia’s most experienced performers, as both a feature comedy act and MC/Host, seeing him nominated twice for Best Stand-up comedian in Australia. Jason’s squeaky clean generic material is suited to all ages and walks of life through to his more rough and tumble R rated shows never disappoint and leave the audience in stitches.

Jason excels at charity events, sporting functions and corporate events and is able to provide a clean, creative and polished performance. He is able to tailor his show to cater for individual requests and corporate requirements to ensure a stress free and memorable event. His comedy style is adaptable and flexible; he has entertained small intimate crowds through to large festival events. Jason is reliable, well-presented, easy to work with and ever the professional; always arriving early to events to ensure smooth running and to help with heading off of any potential issues, if required.

Jason shines above the others with his natural quick witted improvisation skill. A skill that only less than one percent of working comedians have. This skill you cannot learn, like freak athletes you are born with this rare gift. Jason is what’s known as a comedians comedian. This makes Jason stand out.

Jason was a regular presenter on the Comedy Channel where he also produced his own shows – ‘Dawn and Barry’, a clay animation production reviewing the Olympics (with a 6 hr live to air turn over). It was a world first and saw Jason nominated for an Astra Award as well as grace the cover of the Foxtel Magazine. Jason has also written two books; ‘Rash’s A - Z of Lying’ and ‘The A - Z of the Best Jokes in the World’ (Pan Macmillan), both have had great success in Australia and the UK. He has also written, produced and appeared in his own music video – ‘Something about Australia’.

In 2014 Jason signed with the most exclusive American cruise line agency Barry Ball Artists and has been in huge demand on the 5 and 6 star world cruise ships. He is popular on Celebrity, Royal Caribbean, Norwegian, Holland America and is currently rating number 1 on Princess and Carnival cruise lines.

Performing on over 35 cruises per year to between 3 to 5 thousand people per week and working alongside some of the world’s top artists. This means you have to be good, exceptionally good. Jason is a must see, his testimonies stand tall. Jason’s other interests are surfing, football, fishing, cooking and golf.