Print
With film credits such as Nim’s Island, Daybreakers, Star Wars Ep. II & III, Navigator and Never Say Die, Jay Laga’aia is one of the most in demand and versatile actors to land on Australian shores. 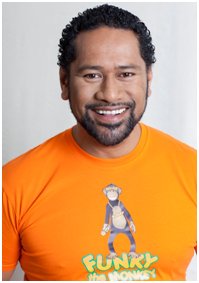 Jay Laga'aia is a much-loved actor and children's entertainer.

His film credits include Nim's Island and Star Wars, and television credits on Home and Away, Bed of Roses, Legend of the Seeker, Xena Warrior Princess and of course, Play School!

He has played Mufasa in The Lion King, The Wizard in Wicked The Musical, and performed in Children of the Sun with Sydney Theatre Company.

A gifted musician Jay has written and recorded four children's albums with ABC for Kids and toured his live show throughout Australia. He’s performed with Queensland, Melbourne and WA Symphony Orchestra, and will perform with Sydney Symphony Orchestra in December this year.

In 2017 Jay appeared in I’m A Celebrity Get Me Out of Here on Network Ten, and on the new FOXTEL drama series Fighting Season. He filmed the fourth season of his children’s television show Jay’s Jungle for 7TWO. He starred in the Sydney Opera House Classic Christmas Concerts with Sydney Symphony Orchestra, and the pantomime Puss in Boots at Angel Place.

So far this year Jay has played the tile role in Shrek The Musical at the Parramatta Riverside Theatre.

Jay is the Queensland Government’s ‘The Early Years Count’ ambassador and is a passionate advocate for early childhood education and early literacy.

Jay is a proud father of 8.

The importance of literacy