Jeff's versatility ranges across funny and up-beat after-dinner speaking, Industry Awards hosting, product launches, corporate voice overs, script writing and editing. His attention, preparation and tailoring of his show to specific client needs sets him apart from others in the corporate entertainment world. 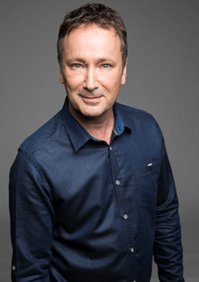 “Jeff performed tremendously as the MC at one of our recent events. He understood the corporate objective and was able to deliver the message with comedic wit. Jeff was such a pleasure to work with that we would jump at the opportunity to book him again and would strongly recommend him to other clients.”

Jeff was head and shoulders the best act at the Bluescope Steel Event. A brilliant talent!

‘I’ve had several comments from attendees on the night saying such things as “my wife couldn’t stop laughing”, “He was hilarious”, makes my job easy.’

Award-winning British comedian Jeff Green has become a well known face and voice on Australian TV and radio since arriving for his first Melbourne International Comedy Festival performance in 1996. Now an Australian resident (he has an Australian wife), Jeff is greatly in demand here and in the UK, Europe and Asia as a highly entertaining after dinner speaker, MC and keynote speaker.

Jeff is also a well known BBC radio broadcaster and best selling author. Amongst his many Australian TV credits are Spicks and Specks (ABC), Good News Week (TEN) as well as numerous appearances on the Melbourne Comedy Festival Gala (Ten).

Jeff is a best selling author with his books selling over 300,000 copies. His first book reached No 5 in the Sunday Times Bestseller List. He has been translated into several languages including Polish, Portuguese, Finnish, Serbian, Spanish and Klingon (just checking you're still reading). Jeff also writes a monthly column for The Readers Digest.

Jeff is a well known UK radio star with three BBC Radio 2 comedy series of The Green Guide to Life, a show that attracts audience averages of over 3 million radio listeners. He has appeared on shows including Celebrity Masterchef and as a guest on Comedy Roadshow (both BBC1)

Jeff is rightfully considered one of Australia’s very best after dinner speakers. As an acclaimed international comedian, Jeff is hugely entertaining with an enviable ability to address the widest range of industries and audiences. Whether your event requires a punchy lunchtime speech or an evening mix of hilarious anecdotes and pin sharp observations, Jeff is able to effortlessly deliver the most appropriate entertainment.

​
Jeff is a warm, engaging and smart MC. Bringing to your event many years’ experience as a BBC radio presenter and TV host Jeff is able to quickly grasp the most complex of briefs to seamlessly execute your timetable of events with his trade mark wit and affable professionalism.

Jeff is passionate about change, and he knows a thing or two about it, his keynote presentation is  ’Without Change There Would Be No Butterflies – A Guide to Embracing Change. Jeff’s inspirational, insightful and often hilarious story recounts his negotiation of personal and professional life-changing events. His presentation will energise your audience with his clear guide to viewing change as a potent and positive force.

Jeff's versatility ranges across funny and up-beat after-dinner speaking, Industry Awards hosting, product launches, corporate voice overs, script writing and editing. His attention, preparation and tailoring of his show to specific client needs sets him apart from others in the corporate entertainment world.

‘Observations of a Middle Aged Man’