Known as ”Thommo” Jeff Thomson made his debut for Australia in the test match on 29 December 1973 against Pakistan. He soon became known as one of the fastest bowlers ever to play Test cricket. His opening partner was the great Dennis Lillee and they were without a doubt the most deadly combination of their time. 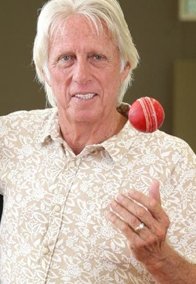 He was very good. Held the audience and an appropriate speaker for that audience. I thought he connected well with the audience. I didn't even notice that he spoke for a long time, probably because he was entertaining. The audience was on the edge of their seats for the entire one and a half hours he spoke.

Jeff was very good on the night and the majority thought he was very entertaining.

Jeff ‘Thommo’ Thomson travels from QLD
Fee Range: Up to $5000

Known as ”Thommo” Jeff Thomson made his debut for Australia in the test match on 29 December 1973 against Pakistan. He soon became known as one of the fastest bowlers ever to play Test cricket. His opening partner was the great Dennis Lillee and they were without a doubt the most deadly combination of their time.

Jeff won a fastest bowling contest in 1978 with a quick time of 147.9 ahead of the great West Indian bowler Michael Holding with 141.3 and Imran Khan of Pakistan with 139.7.

In 1975 he was timed using high-speed cameras at a staggering 160.45. The following year he improved his time to 160.78. Fellow team mate Rodney Marsh claimed that Thomson had bowled upwards of 180km. Clive Llyod the West Indian legend, said that “Thomson was the fastest bowler he’d ever seen”.

In the days when Thomson played, there was no protection for the batsman like there is today, so facing a ball bowled by “Thommo” must have been terrifying.

Thomson came to the fore in 1974–75 with 33 wickets in The Ashes series. Modern protective items for batsmen, specifically helmets, were not available at the time, and there were no restrictions on the use of the bouncer. The success of the Australian cricket team with fast bowling prompted an era when pace bowling dominated the game, at the expense of slow bowling.

He caused controversy when interviewed during the 1974-75 series, when he said “I enjoy hitting a batsman more than getting him out. I like to see blood on the pitch”. The English Team were a little mystified by Thomson in this series, as they had only seen him bowl once during a tour match against Queensland in the same year.

He played his last Test and One Day International games in 1985.

With a strong identity from his exploits as a competitive international sportsman, ‘Thommo’ has built on his public identity through professional coaching, motivational speaking and media commentating. He delivers humorous sporting anecdotes and cricketing stories.

Thomson became one of just 43 players from the almost 140-year history of Australian cricket to be inducted to the Hall of Fame, alongside Queensland and Australia wicketkeeper Wally Grout in 2016. Thommo’s presentations are entertaining and insightful and focus on his brilliant career, his insight to the game and the way it has changed and played today. Thommo is also available for corporate and charity golf days.