Print
Joe Avati’s comedy is unique in that he performs both entirely in English or in a mixture of English and Italian. His inimitable style of telling stories and being able to extract from everyday situations a raucous laughter from any attentive audience with his observations. 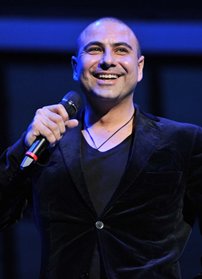 Joe Avati’s comedy is unique in that he performs both entirely in English or in a mixture of English and Italian. It is the latter that made him famous with Italians all over the world. His success is due to a number of reasons. Firstly its his inimitable style of telling stories and being able to extract from everyday situations a raucous laughter from any attentive audience with his observations.

Joe Avati is one of Australia’s top comedy exports sitting just behind Kath and Kim, Chris Lilley and Barry Humphries. He is also the worlds number one selling bilingual comedian. His massive cult following sees him crisscross the globe performing his unique brand of comedy (performing in both English and Italian) on both sides of the Atlantic where he sells out in the United Kingdom, The United States of America and Canada where he enjoys rock star status. This puts him into an elite group of comedians alongside the likes of Jerry Seinfeld, Russell Brand, Robin Williams, Bill Cosby, Billy Connolly and Barry Humphries.

He is the only Australian artist to have had two albums charting simultaneously in the top 5 internationally (‘Livin La Dolce Vita’ and Live and Unpluggato’) and still holds the record for the fasting selling comedy show ever in Canada selling 6400 tickets in 2 hours. He boasts two number one albums in Canada with one of those albums holding the top spot for 18 months straight. What makes this even more remarkable was that Joe Avati was, at the time, only 27.

Joe regularly sells out theatres in his homeland of Australia with his Joe Avati Live tours and has carved himself a reputation for being a shrewd comedy producer with the success of his productions IL DAGO, IL DAGO II, Comicus Erectus and The Good The Bad and The Ethnic which he also starred in. The Toronto Sun labelled him “Pure comic genius” not only for his routines and comedic output (5 live albums and 5 live DVD’s) but also for his ability to market himself through the internet. The Globe and Mail went on to say that Joe Avati is “…one of the planets hottest comics.”