Print
Joel is a masterful storyteller who weaves narrative, music, and beautiful pictures into an emotive, motivational speaking experience. He draws upon his own unique life story to connect with audiences and demonstrate the effect emotive storytelling has on inspiring change. 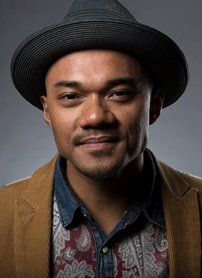 As a five year old boy Joel de Carteret was found by a passing stranger, thought to be taxi driver, lost on the bustling streets of Manila in July 25, 1985 and handed over to the police. After spending a week in a detention centre for children, Joel was sent to an orphanage where he was given the name of the man who found him and an estimated birth year. His birth date read August 4th, the day he was processed into the orphanage.

A year later, after failed attempts to locate his parents whose names he did not know, Joel was adopted by the de Carteret’s, an Australian couple, and flown to Melbourne, Australia, a place he would grow to call home.

For 31 years Joel believed that finding answers about his origins would be impossible given the limited information he had. His early memories were hazy, generating more questions than answers and had most likely been distorted by trauma and time.

His greatest fear was that if he did find answers, they might prove that he was abandoned or unloved, or even if he was genuinely lost by accident and he were to find information on his parents, that they may have already passed and it would be too late.

Despite this, the yearning to find the missing pieces of the puzzle of his identity was too strong to ignore. He was determined to unravel the mysteries of his own narrative, to search for the answers he had longed for and find home.

Joel de Carteret’s remarkable journey proves the power of love can overcome truly impossible odds. There’s an extraordinary ending to this story, but it begins with heartbreak. As a five year old Joel got hopelessly lost from his mother when he wandered away from the family home and into a bustling city market in the Philippines. He searched and searched but couldn’t find her, and eventually was taken to an orphanage.

Imagine his despair as for the next 18 months this little boy contemplated a future with little hope. But Joel is plucky and also lucky. He’s adopted by a caring and loving Australian family. He goes on to lead a happy and successful life here, except something is always missing. Six months ago, 30 years after getting lost, Joel De Carteret couldn’t ignore the pain any longer. He had to find his birth mother. But in a country of one hundred million, where would he even start to look?


31 years after being found by a taxi driver on the crowded streets of Manila, Joel embarks on a journey to the Philippines to find his birth parents. The details are scarce and the only location Joel knows he was in for certain, is Muñoz Market, the place where he was picked up. Armed with little more than a photograph of himself, some flyers and his fierce determination, Joel sets out on the streets of the busy marketplace in the hope of finding someone who remembers a missing child from 1985.

After a month pounding the streets around Munoz Market, where he was found, he was directed to a couple who believed that he was their long-lost son. However, in heartbreaking scenes, a DNA test revealed they were not related.

Undeterred, Joel then turned to Jessica Soho — often dubbed the “Filipina Oprah Winfrey” — and following a television appeal a fresh lead was found. “After I’d gone through that first experience I didn’t want to get my hopes up and be shattered again,” said Joel.

However, he agreed to meet Herminia Rio. After comparing photographs and immediately feeling an intense bond, they were both sure the search was over — and this was soon confirmed by a DNA test. He also learned that his father, Carding Culadilla, was still alive and had emigrated to the US, where he works as a mechanic.

After returning to Australia to break the news to his adoptive mother Jessica, they both returned to meet Mrs Rio. Now, Joel calls his birth mother “Ma” and Mrs De Carteret “Mum”.

Joel is a masterful storyteller who weaves narrative, music, and beautiful pictures into an emotive, motivational speaking experience. He draws upon his own unique life story to connect with audiences and demonstrate the effect emotive storytelling has on inspiring change. As a Director, Producer and Film Maker, Joel’s ear for music and his eye for aesthetically and emotionally-driven stories make his speaking events an interactive, content-rich, and emotive experience that inspires audiences write and tell their own narrative.