Print
John Fleming is best known for his award-winning comedy career as part of the internationally acclaimed comedy group Scared Weird Little Guys.  With a quick wit, a sharp mind and great knowledge John is able to think on his feet, keep any event moving and any audience engaged. He regularly MC’s gala nights as well as multi-day conferences weaving in his musical ability wherever needed. 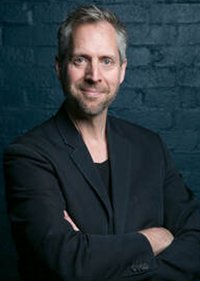 You couldn't get a better MC for a diverse crowd. John gives much of his time to our Charity and also MC's professionally for other events. Funny, prepared and very easy to work with.

John's comedy performance, writing and musical talents are extraordinary! His international success makes him a renowned, knowledgeable and highly-skilled colleague. I heartily recommend John for any creative endeavour film, stage and television.

I was really happy with John’s performance and so too were the audience.

John’s preparation and his natural humour kept everyone enjoying the night. He finished with a song that left everyone on a high. I would highly recommend John for your next event to add some fun and professionalism.

Really appreciate the way you compared and kept the night moving along.

Thanks so much for your hard work and commitment to our event. You were a great MC! We will definitely be in touch for future events.

John is an absolute pleasure to work with. It is obvious he puts in a lot of effort pre event. His research into our Industry and the particular regions our awards were held in was outstanding and added to his performance on the night. His energy and enthusiasm engaged the audience right from the start. We have had such positive feedback. He is a true professional and we would most certainly work with him again on future events!

From packed comedy concert halls to formal function centres to intimate dining rooms John Fleming has played to audiences the world over in every conceivable venue. Best known as the tall half of the Scared Weird Little Guys, John toured for two decades across the US, Canada, the UK and Australia gathering acclaim and awards including an ARIA award, a Mo award, a NACA award (US college award) and multiple COCA awards (Canadian college award).

A veteran of television, radio and live shows, John is an expert in crafting engaging content and clear communication.

In 1989 John launched his songwriting career by winning the pop/rock category of the Australian Songwriter’s Association awards with his song Voices. He has gone on to pen literally hundreds of comedy and non-comedy songs, including an 10 year run of weekly topical songs on ABC radio.

John has worked teaching singing, guitar and songwriting in the Youth Justice system in Victoria, to marginalised members of society and people suffering mental health issues. He has a strong belief in social justice and equal opportunity.

Over the last 5 years John has served on the board of the Thin Green Line Foundation, a charity benefiting park rangers the world over. In the past year alone the charity has deployed over $1.5 million to projects world wide.

In 2019 John completed Engagement Essentials with IAP2 (the international association for public participation), gaining valuable skills and expertise in getting people engaged and participating.

With a quick wit, a sharp mind and great knowledge John is able to think on his feet, keep any event moving and any audience engaged. He regularly MC’s gala nights as well as multi-day conferences weaving in his musical ability wherever needed.

John's experience in liaising with event organisers and clients makes putting that aspect of the function together a breeze. John has enormous experience in reading a crowd, be it an intimate gathering or a large plenary session. John has the ability to compose entirely original musical works for your event. Deliver a message or poke fun at an audience.

As a veteran of over 5,000 shows John has a great sense of what makes events work.