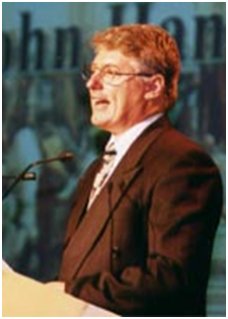 John Hanrahan has worked in newspapers, radio, television, marketing, public relations and small business management, both in Australia and overseas.
He has more than 25 years cross-media and small business management experience to give clients an extensive range of skills and media options.
As well as media contacts, he also has connections in government and industry-specific organisations.
For eight years he was the senior reporter and producer on the Nine Television Network's Small Business Show.
Prior to his work with Channel Nine, John Hanrahan was Managing Editor of Dynamic Small Business Magazine and before that Managing Director of joint US-Australian television production company, Taffner Ramsay Productions.
He worked as a Senior Account Executive for PR, marketing and advertising company Charlton Media in Sydney and has been Australian editor of Los Angeles based business daily, The Hollywood Reporter.
For 12 years he worked as a daily newspaper journalist for the John Fairfax and Sons publishing group in Sydney after spending three years working in British daily newspapers and reporting for Cumberland Newspapers in Sydney.
He has also worked for the Seven and ABC television networks in Australia as a reporter, producer and news presenter and for radio stations 2GB, 2BL and 2UE.