John Peters was a POW during the Gulf War.  He suffered tremendously under the Saddam Hussein regime.  Now, John Peters works with his audiences to deal with uncertainty, change and performance under pressure. A Performance coach and bestselling author, John is a sought after speaker. 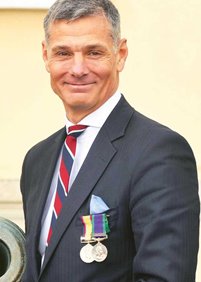 “The response to your talk has been outstanding. The delegates were deeply moved by your experiences and they have been left with a lasting impression of your bravery and determination. ”
The Royal Bank of Scotland

“There was no-one in the room that wasn’t one minute moved to tears, the next gasping or laughing. I know I was riveted throughout your presentation. You have a great sense of humour as well as a real humility. It was truly a memorable experience for each of us at the event.”
Stanley

“Hearing your story helped to re-align things in which I had, quite frankly, been overly worrying about. On top of that, what a fantastic delivery. I can’t remember the last time I have heard someone speak so captivatingly for well over an hour. A true inspiration. ”
Serco

“It was one of the most extraordinary talks I’ve been to, and has given me lots to think about…. I know everyone else in the audience found it just as interesting and spellbinding. ”
Red Cross

“The audience was absolutely captivated by him and absorbed every single word that he delivered. John truly is a hero in every sense of the word and the feedback that we have received from our guests is off the scale!”
Gordon Poole Agency Ltd

“Your presentation was one of the most moving and poignant I have ever heard. ”
Institute of Directors (IOD)

Many will remember John from the 1991 Gulf War when, as a Prisoner of War, the enduring, iconic image of his battered and bruised face was paraded on television by Saddam Hussein’s brutal regime. It is his insight and ability to relate this to everyday challenges that keeps him a unique, contemporary speaker that is in constant demand and why so many are eager to hear him speak.

With over 15 successful years on the public speaking circuit, John has gained an international reputation as an exceptional and versatile speaker with audiences worldwide ranging from 5 to 5500 people, from corporations to charities, from Royalty and Heads of State to schools. Of note, he was the sole reader representing the British Armed Forces at the National Gulf Memorial Service, in front of Her Majesty, The Queen, presented the Sir James Martin Lecture at the Royal Aeronautical Society in the presence of Prince Philip, and has followed Mr Nelson Mandela on stage in South Africa for which he gained a standing ovation!

Concurrently, John has over a decade’s experience in business consulting developing senior business leaders with a particular focus on leadership, resilience, uncertainty, motivation, strategy and change. These unique attributes allow John to seamlessly tailor a speech to whatever the client’s requirements may be and thereby supply the perfect address for any event. His insights generate actions; these actions inspire performance.

John is a highly accomplished and versatile international public speaker. Many will remember him from the 1991 Gulf War when, as a Prisoner of War, the enduring, iconic image of his battered and bruised face was paraded on television by Saddam Hussein’s brutal regime. His ordeal was one of seven weeks of physical and psychological torture. Since that defining moment, John has used his experience to inspire and motivate audiences from around the world, earning him a reputation for being one of the best there is.


What’s more, having run a business consultancy focused on helping senior executives with leadership, strategy and change, he is superb at appreciating business challenges to translate and tailor his story to your organisation’s needs. Far from being a doom and gloom merchant, his innate sense of timing and humour equips him with the dynamism to capture the spirit of any event.

John is consistently in demand for keynotes, conferences, after-dinner speeches and luncheons. His clients include every kind of organisation from FTSE Global 100 firms and the public sector to charities and local primary schools. He has vast experience of speaking to diverse and international audiences including America, Australia, Hong Kong, Kuwait, Russia, France, Canada, Sweden, Norway, Denmark, Portugal, Spain and the Republic of Ireland.