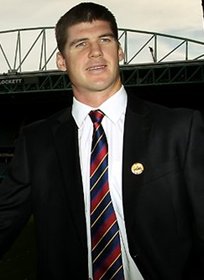 Jonathan’s retirement places him perfectly for availability for speaking engagements highlighting his career, motivation, teamwork and what it takes to ‘be the best’. Known for his courage, strength and imposing style of play Jonathan is the son of former Fitzroy player Brian, Brown grew up in Warrnambool and played TAC Cup for the Geelong Falcons. A Vic Country representative at Under 16 and Under 18 level before being drafted as a Father-Son selection to the Lions in 1999.

In 2000, Brown made his debut against the Adelaide Crows and saw finals action in his first year as a Lion. A year later, Brown became an AFL Premiership player a month shy of his 20th birthday, as the Lions secured a history-making Premiership win. Brown announced his arrival with 7 goals against Geelong at the Gabba, drawing immediate comparison with the best forward in the game at the time, Wayne Carey.

A second Premiership medal came his way in the 2002 before Brown produced a superb finals series in 2003, being best afield in the Preliminary Final as the Lions marched to a third straight title.

Not yet 22, Brown had stamped himself as one of the game’s most dominant forces.  Injury and suspension curtailed his presence in 2005-06 but it was evident that his best was still ahead of him.

Brown’s standing among his peers speaks volumes – he has won both the AFLPA Best Captain and Most Courageous Player awards on multiple occasions.

He started 2013 by captaining the Lions to the NAB Cup title, a night on which he kicked five goals in a dominant display. Off-field, his playing style, presence and country boy nature has seen him liked by fans across the game. He is a father to Olivia and Jack with a 3rd baby on the way.

Brown has been one of Adidas’ feature AFL players for many years and is one of the most popular members of Nine’s showcase program, The Footy Show. Brown has associations with major brands Toyota, Four’n’Twenty and NovaFM.
Subscribe
© 2022 Platinum Speakers