Innovator, disruptor, cultural leader and genius Jonathan Holloway is a man of immense talents – he’s a highly acclaimed International Chief Executive, Artistic Director, consultant, writer and speaker. His uniquely diverse background affords him the extraordinary ability to make innovation, collaboration and creativity happen across all sectors, both domestically and overseas. 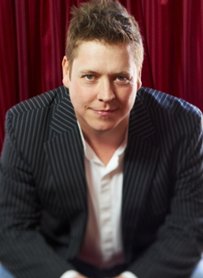 Jonathan was the stand out presenter at the conference and took the audience on a unique behind the scenes journey of the Giants. Funny and inspiring he gave us insightful and practical take aways to use in our own journey and most importantly dared us to be visionary and creative in all aspects of our lives.

A great orator and teller of stories, he has that unique ability to create wonder in audiences. Jonathan has presented to our employees on many occasions and they always come out saying 'that was amazing, really enjoyed the presentation and the humour’.

Jonathan is a dream to work with, a force of nature. Passionate, funny, highly effective plus an accomplished artist.  He's got great guts and artistic vision.

Jonathan transformed a street performance into a discussion on IT, systems and infrastructure with insight, humour and enthusiasm.

Innovator, disruptor, cultural leader and genius Jonathan Holloway is a man of immense talents – he’s a highly acclaimed International Chief Executive, Artistic Director, consultant, writer and speaker. His uniquely diverse background affords him the extraordinary ability to make innovation, collaboration and creativity happen across all sectors, both domestically and overseas.

Boasting over 25 years of professional experience in flagship organisations, he can help corporations draw out ways of scaling up, drilling down, gaining momentum and finally, persuading and influencing in order to achieve giant results. As a CEO, his creative thinking has given him the ability to inspire change and turn companies around quickly.

Formerly, as Co-CEO of the Melbourne International Arts Festival, he drives organisational strategy, change management, business planning, finance and delivery and leads a diverse team people. And as Artistic Director, he’s the figurehead for the organisation year-round, with lead responsibility for the vision, direction, programming, artistic content and messaging of the Festival’s activities.

Jonathan is a true champion of giant thinking and delivery; whose unique vision inspires everyone to dream large, live boldly and make amazing things happen.

With a humourous and audacious style, Jonathan delivers bespoke presentations bursting with creativity, rewarding any audience with an unexpected and unforgettable storytelling experience.

Using exhilarating creativity and irresistible spectacle, he has dedicated his professional life to transforming great organisations and cities, from London's South Bank to major international arts festivals in Europe and Australia.

Born and bred in Sheffield, he cut his teeth as a stand-up comedian and theatre director, since when he has travelled the world as a festival director, chief executive, educator and cultural leader.

In the UK he spent seven years heading up public events at London’s National Theatre, then seven years leading the team at the Norfolk & Norwich Festival, growing it massively to be the third largest annual arts festival in the UK and delivering Creative Partnerships for the region, the government's flagship creativity in schools programme.

In Australia, his first Perth International Arts Festival in 2012 opened with 30,000 people dancing in the streets, as angels and two tonnes of feathers fell from the sky. In 2015 he masterminded the largest single arts event Australia has ever seen, when 1.4 million people spent three days walking with giants through the main streets of Perth.

In 2017 he brought Taylor Mac’s epic 24 hour production A 24-Decade History Of Popular Music to Melbourne, the only time it will be seen complete outside the US. All three won the rare and prestigious Helpmann Award for Best Special Event.

Currently the Artistic Director and Co-CEO of Melbourne International Arts Festival, the flagship arts event of Australia’s cultural capital, the Sydney Morning Herald hailed 2017 as “the strongest Melbourne Festival in years... only the brilliance and daring of festival director Jonathan Holloway’s programming made it possible, and if you didn’t see it, you missed a landmark theatrical event”.

His 2018 Melbourne Festival was headlined by the Fire Gardens, an immersive fiery spectacle that took over the whole of the Royal Botanic Gardens, with all 30,000 tickets selling weeks in advance.

By championing giant thinking and vision, managing talent, leading delivery teams, and collaborating with governments, sponsors, the media and the public, he has repeatedly harnessed innovation, persuasion and health & safety to create unmissable, unexpected and unforgettable experiences for massive audiences.

Jonathan is a Fellow of the Royal Society of the Arts in the UK, an Honorary Citizen of Perth WA, and a Certified Speaking Professional (the highest globally recognised speaking designation).

Giant thinking - The behind-the-scenes story of dreaming up, leading and delivering the largest arts event Australia has seen, and how to deliver beyond all expectations.

The Festival Formula - The universal appeal and tricks of Festivals, and how to use them in order to make life and work more fulfilling.

Extreme Health & Safety - Having led large-scale outdoor events in major cities from fireworks and fire gardens, the tricks to harness H&S and make it work FOR us.

Scaling Up Ideas - Techniques and tricks of how to take your ideas and goals, and multiply and deliver them.