Print
Joshua George's enthusiasm and beliefs possess a contagious energy that has helped people build confidence and have made Josh a highly sought after motivational speaker. 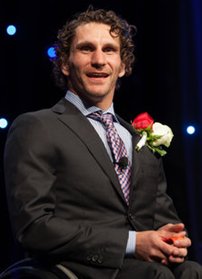 “Working with Josh for our national conference was amazing. Having been left without an emcee two weeks before our event, we were in panic mode, but Josh stepped in and truly saved the day. He arrived completely prepared and was so personable and engaging on stage. Josh received the highest marks ever from our attendees on a follow-up survey. I relish the opportunity to work with Josh again.”

“Josh provided the keynote address to a conference of over 150 executives and managers.  His story was inspiring and uplifting and was well tailored to the audience.  It was certainly a lesson in how personal strength and determination can triumph over adversity, and served as a great start to the conference.  The feedback on the address was all very positive.”

“Josh George brought a message to our students about limitations, expectations and maximizing potential that not only epitomizes his life but sends a great life message to all. The delivery was personal and his interaction with our students was priceless. I would highly recommend Josh to speak at your next function or assembly.”

“Josh George delivers a powerful and insightful message that is captivating and inspiring to his audience.”

Josh George travels from NSW
Fee Range: Up to $5000

Joshua George's enthusiasm and beliefs possess a contagious energy that has helped people build confidence and have made Josh a highly sought after motivational speaker.

It is always a temptation to rely on the “wheels-as-feet” parallel when discussing a wheelchair athlete. It’s direct. It expresses equivalence where some may see a lack. Most of us understand what it means to have feet. In short: it’s fairly fool-proof. Wings, on the other hand? Not so much. Still, it’s the metaphor that tends to drive the narrative of Josh’s story.

The milestones have often been marked by flight. At 4 years old, Josh was momentarily airborne. Life changed forever as he went from walking to rolling in the few seconds it takes for a body to fall from a twelve story window and land on the concrete below.

That Josh survived at all was deemed a miracle by his doctors. That he still had use of his arms and upper body, with no damage to his brain or other vital organs, was a gift on top of that – one that Josh’s parents did not take for granted. Their determination that he would have as full and active and normal a life as possible ensured that Josh did not take it for granted, either.

Josh learned to navigate the world by wheelchair and was soon exploring everything available in the realm of adapted athletics, participating in basketball, track, field, archery, table tennis and swimming with a wheelchair sports organization for children in Baltimore, Maryland. Basketball and racing quickly became his stand-out sports.

Flying soon became a regular and important part of Josh’s existence. Competitive basketball led him to Brazil and Australia before he graduated from high school. At the University of Illinois, he began training with his now long-time coach Adam Bleakney, placed first in three Chicago Marathons and eventually took another flight. This time to Athens for the 2004 Paralympic games where he received two bronze medals and lost any remaining doubt that racing was his calling.


Four years later, in Beijing, Josh brought home silver and gold, and set a Paralympics record for the Men’s 100m. He followed up this performance with a bronze medal in the 800m at his third Paralympic Games in London as a full-fledged professional racer.

While he didn’t crack the podium at the Paralympic Games in Rio, Josh's successes became more frequent. In the four years following the London Parlaympics Josh became a fixture in the top five at major races, success highlighted by exciting, sprint-finish wins in the 2014 Chicago Marathon and 2015 London Marathon, and 2nd and 3rd place finishes at the New York City Marathon in 2015 and 2016, respectively.

Josh’s story is still far from over and he is still soaring. After getting his degree in News Editorial Journalism in 2007, he turned his attention to training, traveling, and competing full time. Along the way he has blogged for the New York Times, helped launch IntelliWheels, Inc. (intelliwheels.net), advocated for amazing causes, and even dabble in coaching. Through traveling, Josh has been able to develop his underlying principles to motivate himself and others; Maximize your Potential, and Keep Moving Fast.