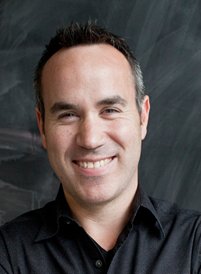 Thanks again for your awesome presentation. Everyone was very impressed and amazed at what lies ahead!

Listening to Justin's speech, I feel they really think differently compared with Chinese internet companies. Wish in the next 10 years, we can see more innovation and open new products! The presentation style is so creative, so different from those other presenters.

As you know we ask the audience to rate each session and speaker. Here are the results for your session: Justin 4.4 ** Justin you were the highest rated speaker on the conference program - congratulations and thank you.

Justin Baird is a leading innovationist and technology futurist sought after both locally and internationally for his presentations relating to digital, media and marketing futures.

Justin is also a founding partner of Jumptank and the Group Innovation Director at Aegis. At Jumptank, Justin consults both internally and externally with clients and partners to drive change that adds value. He is focused on delivering change through the development of intellectual property and products for both consumer and enterprise applications.

Justin is also a member of the 2013 CSCLeaders, a Commonwealth Government leadership group founded, sponsored and hosted by HRH The Duke of Edinburgh, which is tackling the challenges that businesses, governments and society face today to build the global relationships needed by the leaders of tomorrow.

Prior to Jumptank, Justin, originally from the US, was the Innovationist at Google. He launched local YouTube portals across Asia Pacific, supported the launch of numerous consumer product releases including Google Maps and Google Wave, helped launch the first Android mobile devices in the region, brought the Google Creative Sandbox event to Australia's shores for the first time, was a member of Google's Global Creative Council, and co-created DNA, a digital thought leadership series hosted in both Australia and New Zealand. He also developed Digital Bytes, a technology event presentation format that has become the cornerstone of Google's executive client engagement strategy across the Asia Pacific region.

Justin's work was acknowledged by AdNews, Australia's top selling advertising, marketing and media magazine, with their 2010 "40 under 40" award, profiling Australia's leading talents across agencies, clients and the media. He has also actively supported the local creative and digital industries through sponsorship and lecturing at Award School.


Justin is also very actively involved in philanthropic efforts to help drive positive change through technology. For example, in 2008 he drove the global launch of Earth Connect, a global social platform for Earth Hour, and in 2009 he worked closely with the United Nations to create the Show Your Vote platform, an online advocacy tool for the COP15 Copenhagen Climate Summit that was officially sanctioned and supported by the UNFCCC. The open source platform was then also used in online advocacy initiatives, including Earth Hour 2010.

Justin is also on the advisory board of Underwater Earth, which has embarked on the SeaView Survey - a pioneering scientific expedition that is carrying out the first comprehensive study to document and reveal the composition and health of coral reefs on the Great Barrier Reef across an unprecedented depth range (0-100m). Justin's work on underwater panoramic imagery is the subject of one of his patents.

As a musician himself, Justin has a strong passion for music, digital audio, musical computing, live sound and recording. He has worked with artists ranging from Elton John and Barbra Streisand through to Robbie Williams and the Dave Matthews Band in the technology and production of live performance.

Justin Baird holds a dual degree in Electrical Engineering and Music from the University of Miami, providing a unique background in both technology and the creative arts. He was a product management director at Dolby Laboratories Inc. and a research and design engineer at Meyer Sound Laboratories in the fields of electroacoustics and hardware design. Justin also holds a Master of Business Administration from the Australian Graduate School of Management.

Fast forward future - How technology is changing the face of humanity

Mobile for marketers - What works, and what doesn't work anymore

Artificial intelligence in the workforce and the future