Print
If breaking her back on two separate occasions and learning to walk for the third time in her life wasn’t enough to break her, losing her partner, the love of her life to suicide pushed her terrifyingly close to the edge. Through her astounding resilience, Kath Koschel was able to create joy out of sorrow, to become one of Australia’s youngest CEO’s and the founder of the global movement and not for profit organisation Kindnessfactory. 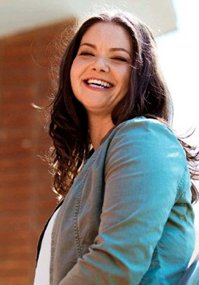 Kath was amazing and such an inspiration. We were so lucky Kath was able to come and speak to us and share her amazing story.

Kath has amazing integrity about her when she speaks. She has a way of connecting with those she addresses and builds rapport with the most diverse audiences. I have seen Kath in various forums and she is always the one to inspire, encourage leadership and appeal to the kindness in all of us. I cannot recommend her enough.

Kath's presentation at our premier's dinner was incredibly moving and inspiring and left all those in attendance uplifted and in awe of her incredible strength. She is very relaxed and relatable. She was able to adapt and keep the audience engaged, event through a technical difficulty. She is simply remarkable.

Kath is an amazing individual who has found the inner light and strength to push forward through tremendous adversity and difficult times. When she shares her personal story you notice that it has an impact on all those who hear it. Her story puts matters in to perspective as to what is really important and she brings light to the power of self-belief and determination. You cannot walk away without a shift in thinking; she challenges you to choose a different way to interpret the world. Kath is inspiring and we were all in awe of the person that she is.

Kath came to our team when we needed it most. We needed inspiration and to realise our purpose as an organisation. Kath delivered on all fronts. She talked us through her journey to kindness and inadvertently encouraged all staff to go above and beyond for all those we are surrounded by. The feedback received from staff was very positive with many leaving the conference that day with a renewed sense of gratitude and elevated level of motivation to be the best version of themselves. We cannot recommend her high enough!

Kath Koschel isn’t your normal athlete. In fact, she’s so modest she wouldn’t even consider herself an athlete. But the former NSW cricketer has more fight in her than most professional athletes ever would. Kath’s story is one of inspiration and utter strength; from a hospital bed defying a prognosis of paralysis to setting up a global movement that drives her every day desire to create a world where people are kinder to one another.

There have been more than a few significant bumps along the way, but Kath has never let the setbacks get the better of her. With her physical and mental resilience, Kath has pulled herself through challenges that most of us could not comprehend, without letting them defy her belief that we all have the capacity for kindness.

If breaking her back on two separate occasions and learning to walk for the third time in her life wasn’t enough to break her, losing her partner, the love of her life to suicide pushed her terrifyingly close to the edge. Through her astounding resilience, Kath Koschel was able to create joy out of sorrow, to become one of Australia’s youngest CEO’s and the founder of the global movement and not for profit organisation Kindnessfactory.

Now known worldwide for her kindness adventures, Kath shares her journey of how she turned adversity into triumph, with the thoughts that lead her to leave her home with nothing but the clothes on her back in an attempt to prove that you really can survive physically, mentally and emotionally, on kindness. An outpouring of support and offers of food and shelter on social media had Kath travelling around Australia on the nothing but the kindness of strangers, spreading her message of hope.

Kath will inspire you to challenge the way that you see the world. She will take you on an emotional roller coaster, leaving you in awe of her incredible strength and determination to do and be better, regardless of the hurdles she has had in front of her. And she believes that anyone is capable of achieving the same.

Amongst all of her challenges, Kath still managed to be awarded the 2016 Pride of Australia Medal, raised over $300K for various charity organisations, completed an Ironman challenge with feeling in only one of her legs, is on the Board of the Australian Young Leaders Initiative, addressed the Australian Prime Minister, is currently training to swim the English Channel, was selected by Marie Claire as a 2017 “Woman of Worth” and is an active mental health advocate.

Becoming the Best Version of Yourself - Kath is the embodiment of goodness and making the most out of any situation. She chooses to focus on the things and abilities we are privileged to have in order to live a meaningful life.

Accepting and Benefiting From Change - After having to rethink her life the first time she broke her back, Kath channelled the same drive and determination that she had as an athlete to create a global movement that inspires people to be better versions of themselves.

Overcoming Incredible Adversity - Kath has broken her back on 2 separate occasions and trained herself how to walk on 3 separate occasions despite being told she would remain paralysed for the rest of her life. Losing her partner, the love of her life brought her close to breaking point but she fought back and is now one of Australia’s youngest CEO’s.

Helping Others While Helping Yourself - Kath is the founder and CEO of ‘Kindnessfactory’, a global Not For Profit and movement that inspires ordinary people to do extraordinary things. The movement was established after Kath realised that we all have the capacity to hep other people in order to help ourselves gain perspective.

Improving Cultures and Team Performance - Cultures change by individuals behaviour. We were born to want to connect and help each other and Kath reminds us all of that

Setting Goals - Professional Athlete, CEO, Australian Medalist, IronMan Finisher. All that amongst 2 broken back and multiple personal tragedies. What’s next? Swimming the English Channel of course!

The Power of Perspective - Kath’s life story puts things in to perspective as to what is really important. She shares her own stories as well as some of the hero’s she has met along the way. These stories will leave you in awe and spring you in to immediate action to want to do more for those around you.