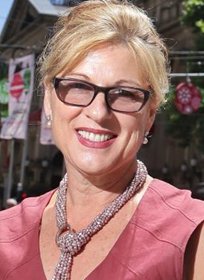 Kathy Alexander travels from VIC
Fee Range: Up to $5000

Kathy Alexander is experienced in leading change, both in large and complex organisations and within smaller community organisations and businesses. As Chief Executive Officer (CEO) in capital city local government, at major teaching hospitals and community health services, Kathy has built a national reputation for embedding stakeholder engagement and community participation in complex and politically sensitive environments, and for initiating improvements in finances and productivity. Kathy provides consultancy services in governance, strategic planning, change management and service improvement in the public and private sectors.

As CEO of the City of Melbourne, Kathy led an organisation comprising more than 25 businesses and 1300 staff with an annual operating budget of more than $365million, and a capital works program of almost $100million. She ensured the effective operation of a dynamic 24-hour city that consistently rated at the top of international surveys on liveability. Kathy also represented the Council as the sole shareholder of the City of Melbourne’s two large for profit subsidiary companies, Citywide and the Queen Victoria Market.

As CEO of Women’s & Children’s Health, which governed the Royal Children’s Hospital (RCH) and The Royal Women’s Hospital (RWH) in Melbourne, Kathy led a financial recovery program that saw a $15m productivity gain over four years. and also led a capital bid for construction of a new $250m women’s hospital and initiated planning for the new RCH. In Adelaide, Kathy led the organisation design project to amalgamate the State's women's and children's hospitals before taking up the position of Deputy CEO.

Kathy is experienced in preparing briefs for government and bids for private consortia for private/public partnerships in the design and construction of major infrastructure projects.

Kathy’s work has been recognised with several national best practice awards and leadership positions on a number of Boards.