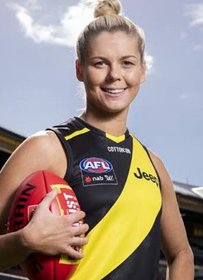 Katie Brennan travels from VIC
Fee Range: Up to $5000

Katie Brennan played in the inaugural season of AFLW as a marquee signing and captain of the Western Bulldogs. She then led the Bulldogs to the Grand Final in 2017, and despite controversially missing out on the premiership, Brennan was called on stage to hold up the trophy as an integral part of the team.

Katie kicked fifteen goals in thirteen games with the Bulldogs and was the leading goalkicker in 2019 despite an injury riddled time with the club.

Katie signed with the Richmond Football Club at the end of 2019 season, joining the expansion club for a fresh start following problems with injury and the difficulty of missing the premiership with the Western Bulldogs.

Katie is the founder of her gym, KB.Performance, which looks to educate, inspire and empower women on and off the field in what is a women’s only elite performance space.