Print
Kay Cottee AO was the first woman to sail solo around the world. As a child Kay Cottee sailed with her father and helped him build yachts. She started ocean racing when she was 11. Kay left school at 16 to find work, but her love for the sea led her to start a yacht charter business. Kay built First Lady, the 11-metre yacht on which she would sail around the world. 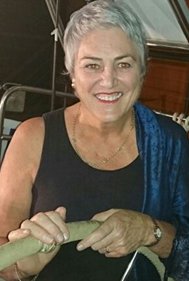 Kay’s session held all delegates spellbound. Those who didn’t really know what Kay could offer, I believe, came away with a greater appreciation of her achievements. The inspiration she gave us all was beyond comprehension. A session I personally could see over again.

Our team thoroughly enjoyed Kay Cottee's presentation and we've had loads of very positive feedback on her talk. She was an interesting and inspiring speaker. I would have cut the video and slides out and had her speak for longer!

Our highest achievers were inspired and moved. Boy, what a way to get them fired up for the challenges we face!

Kay spoke from the heart and delivered a moving and fine address.

Kay's presentation was very moving. She presents in a very relaxed understated manner - she was great.

Kay Cottee AO was the first woman to sail solo around the world. As a child Kay Cottee sailed with her father and helped him build yachts. She started ocean racing when she was 11. Kay left school at 16 to find work, but her love for the sea led her to start a yacht charter business. Kay built First Lady, the 11-metre yacht on which she would sail around the world.

In 1987, at the age of 34, Kay Cottee set off on her 189 days, 22,000 nautical miles journey to sail solo non-stop around the world from west to east. On this voyage she set the record not only as the first woman to circumnavigate the world but for the longest time at sea by a woman, the longest non-stop distance sailed by a woman, and the fastest time and speed for solo circumnavigation by a woman.

Kay Cottee's voyage was a heroic achievement. She had no fresh food so for six months, and had to survive on dried food. She had to wake up every hour to check her course and watch for ships that may have been heading towards her. She faced dangers such as storms, winds of more than 100 knots, seas with 60-metre swells and huge icebergs. Rounding the southern African coast, First Lady was capsized by a 100-knot gale, and Kay was flung into a churning sea. Fortunately, after several minutes, the tumultuous seas righted the vessel, and Kay was 'scooped' back on deck as the yacht regained its keel. She had to manage with the knowledge that she had only herself to rely on.

Kay wrote a book about her experiences and has raised over $1million for a life education program through speaking engagements. In 2000, Kay made the difficult decision to give First Lady to the National Maritime Museum in Sydney, a decision that required her to restore her beloved craft to the condition it was in when it rounded the globe 13 years before. Kay confessed that the yacht was 'like a child ... I've had her for 14 years, built it, gone through good times and hard times [with her].'

Kay Cottee has achieved much but considers her greatest achievement is living her dream.

When her voyage ended, the accolades began. She was named the Bi-Centennial Australian of the Year in 1988, made an Officer of the Order of Australia and is the second only ever recipient of the Cutty Sark Medal - UK. Kay was also appointed Chairman of the National Maritime Museum in Sydney.

Kay Cottee has written two books. Her first, "Kay Cottee - First Lady", broke Australian publishing records. She works as a painter and sculptor on NSW's north coast and exhibits in her own fine art gallery at the Yamba Marina.

"Kay Cottee - First Lady" - How ordinary people can set and achieve extraordinary goals. Kay story is all about dedication, planning and preparation - the key ingredients to success in every way, shape or form. Kay Cottee's story is remarkable, but best of all it's true.