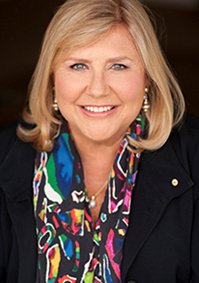 Kim McKay reminds us that big change starts with small, individual actions. In discussing True Green at Work at the Treasury Executive Institute, she gave a compelling call to action for each person to make changes that can help save this planet we share. She moves beyond gloom and doom predictions to share practical, easy changes to our daily behavior that cumulatively can make a big difference.

Kim's discussion of her book True Green @ Work was the jump-start we needed. Her knowledge and passion for the topic is extraordinary. She held the audience captive with her stories, her facts and her humour. I feel we moved forward one year in one hour.

Her talk on the environment is fun, fact filled, convincing and animated. She is an engaging speaker whose passion for her work shone through each time. Audiences left feeling inspired rather than depressed and she stressed her theme of one person making a difference.

Kim was fantastic. She uses a blend of knowledge and humour to really engage with her audience and to provide a global overview as well as an insight into her own personal journey championing the environment. As a speaker, Kim conveys both authority and accessibility in equal measure.

We can’t thank Kim enough. She delivered a really compelling and inspiring speech to kick off our sustainability campaign, Project Leaf, and certainly got the staff talking. It was very aligned with our objectives for the event and the entire Green Team were thrilled.

Kim McKay's international career in media, social and sustainability marketing and communications spans over 25 years and every continent. A highly skilled communicator and entrepreneurial marketer, Kim has created and managed many visionary and large scale international projects.

Kim has worked consistently in support of the local and global environment for two decades, starting when she co-founded Clean Up Australia and then later Clean Up the World with Ian Kiernan, AO. Today, Clean Up Australia is the one of the largest community environmental projects in Australia and Clean Up the World now operates in 120+ countries and annually involves over 30 million participants. The message that everyone can make a difference has been the driving theme behind her actions.

Kim McKay is currently managing director of Momentum2, a social & sustainability marketing and communications consultancy and has worked on local and global projects for National Geographic Society, Qantas and Harpo Productions among other clients.

She is the co-author with Jenny Bonnin of five books in the True Green series published in Australia and in the US. True Green Kids is the winner of one of the USA's most prestigious children's science book awards, the AAAS/Subaru Book Prize for Best Hands On Science Book and has been featured in the journal, Science Magazine.

Kim is a regular media commentator on practical environmental action and is an inspirational public speaker addressing business and not-for-profit conferences as well as community groups on her rich experiences.

In the past few years Kim has appeared as a panellist on ABC TV's top-rating show Gruen; MC'd Oprah Winfrey's only media conference in Australia; presented a series of on-camera ‘True Green Tips' for Sky News in Australia; co-authored a weekly ‘True Green' column for the Sunday Telegraph ‘Body and Soul' newspaper in 2007; and was named in G Magazine's Top 20 Australian Eco Heros list in the November 2009 issue. From 2006-2011 she presented a weekly True Green spot for ABC regional radio in NSW.

In 2004 Kim returned to Australia after several years working in the US for the Discovery Channel and National Geographic Channels International. Since then, Kim has co-created The Genographic Project for National Geographic with population geneticist, Dr. Spencer Wells. One of the largest and wide-ranging projects in National Geographic's 120 year history, the five year+ global study traces humankind's migratory history during the past 60,000 years.


Her career has been dominated by adventure pursuits and the environment - she was a project manager on all four BOC Challenge solo around the world yacht races in the 1980s and 90s; a media representative on the APSA World Pro Surfing tour in the 1980s; executive director of Discovery Channel Eco-Challenge in Australia, Morocco and Argentina in the late 1990s; and in recent years, part of National Geographic research and filming expeditions to Peru, Egypt and India.

In June 2008 she was awarded an Order of Australia (AO for distinguished service to the environment and the community and in 2011 she was awarded the University of Technology, Sydney Chancellor's Award for Excellence - the highest honour awarded to a former Alumni.

In 2011, to mark the 100th Anniversary of International Women's Day, Kim was included in the Westpac-sponsored book ‘The Power of 100...One hundred Women who have shaped Australia'. That same year she was named as a founding Luminary at the University of Technology, Sydney.

Kim has won numerous Australian and international awards for her work in the environment and communications including a PRIA National Golden Target Award, a United Nations citation for Clean Up the World and IPRA's Golden World Award for Excellence in Environmental Communication.