Print
Three-time Paralympic gold medallist Kurt Fearnley AO was recently awarded 2019 New South Wales Australian of the Year. Kurt has a can-do attitude that makes the impossible possible. At the 2018 Gold Coast Commonwealth Games, he won gold and silver medals and was chosen as Australian Flag Bearer for the Closing Ceremony. 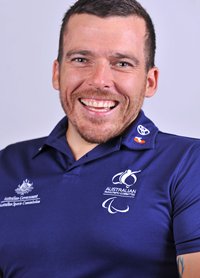 Amazing audience response. He received a standing ovation. Highlight of our conference

You could have heard a pin drop with an audience of 400. Moving story, great guy, Would have him back again. Highly recommend him, very inspiring.

Kurt is warm, engaging, funny and inspirational. Without a doubt, he is one of Australia's most focussed and exceptional athletes - his list of achievements speaks for itself. Despite this, he is supremely modest and unassuming. From the moment he "rolled" up onto the stage we were captivated, inspired and amused. Kurt left us all in a better place and motivated to achieve. We could not have found a better speaker for our conference.

He was simply inspirational. He is also a very personal young man who spent some time talking with the Red Bend Catholic College students who were present and shared his experiences with them by letting them handle three of his medals - his Silver Medal from the Sydney Olympics, his Gold Medal from the Athens Olympics and his solid Gold Medal for winning the New York Marathon last year.

The audience was captivated throughout Kurt's appearance and walked away motivated and inspired.

Kurt was extremely well received by the audience, in fact the feedback received from the group was excellent, they all really enjoyed hearing his stories and the challenges that he faced in his life (and overcome).

Three-time Paralympic gold medallist Kurt Fearnley AO was recently awarded 2019 New South Wales Australian of the Year. Kurt has a can-do attitude that makes the impossible possible. At the 2018 Gold Coast Commonwealth Games, he won gold and silver medals and was chosen as Australian Flag Bearer for the Closing Ceremony. Kurt's determination and never-say-die attitude have rewarded him with the highest accolades in disability sport.

Kurt is also active in advocacy work. He has been an ambassador for the Don't DIS my ABILITY campaign, was a 2010 International Day of People with Disability Ambassador and has contributed to the debate surrounding funding of the National Disability Insurance Scheme (NDIS). In June 2018, Kurt Fearnley was given the Honour of being named an Officer of the Order of Australia (AO)

A gifted keynote speaker, Kurt's infectious energy and passion for life inspires and motivates audiences across age groups and industries.

Kurt Fearnley was born without the lower portion of his spine, yet despite this, he's always been willing to have a go at everything.

The youngest of five children from the small western NSW town of Carcoar, sport was always a big part of his family's life. Ignoring his disability, he happily played in everything against his able-bodied brothers and mates.

With an indomitable spirit, Kurt took up wheelchair racing when he was 14. From pushing his everyday wheelchair as fast as he could down the grass track at school athletics carnivals to pushing his chair the last five kilometres on a flat tyre at the Athens Paralympics, he went on to win gold in the toughest marathon in Paralympic history.

One of Australia's best-known and respected athletes, Kurt has won some of the world's most prestigious marathons, in London, Paris, Rome, Los Angeles, Chicago & New York; the latter two, an incredible five times. Kurt won the Paralympic men's wheelchair marathon in Athens in 2004 and retained his title in Beijing in 2008. Marathon podium finishes in London (2012) and Rio (2016) cemented four consecutive Paralympic Marathon medals. He had the honour of serving as the Captain of the Australian Paralympic Team during the Rio campaign.

At the 2018 Gold Coast Commonwealth Games, Kurt won the gold medal in the Men's Marathon T54 and silver in the Men's 1500 T54. He was given the honour of the flag bearer at the closing ceremony.

Kurt has achieved world champion status in wheelchair events ranging from 800m to the marathon. His marathon personal best is one hour 18 minutes and 51 seconds, set in Boston in 2011.

Off the racing circuit, Kurt has been a winning crew member of the Sydney to Hobart Yacht Race, taking line honours in 2011 on board the yacht Loyal. However, he is best-known for his amazing feat of crawling the 96km Kokoda track.

Kurt is actively involved in various charities as a board member and patron. He is an ambassador for the Day of Difference Foundation and for the International Day of People with a Disability; in 2016, Kurt was elected by his peers to be one of six Summer Paralympic Athletes to serve on the International Paralympic Committee's Athletes Commission.

Kurt's achievements have been publicly recognised many times; he was the flag bearer for Australia at the closing ceremony of the 2018 Commonwealth Games on the Gold Coast; in 2015, he was the AIS Sports personality of the Year and Newcastle Citizen of the Year.

In 2010, Kurt was immortalised when his image featured on the medals for the 2010 Blackmores Sydney Running Festival. On the 22 January, 2013, he was given the annual Australian honour of giving the 2013 Australia Day Address.

In 2009, he was the NSW Young Australian of the Year; in 2007 and 2009, he was a Laureus World Sports Award Finalist and Commonwealth Athlete of the Year with a Disability. Kurt was awarded a Medal of the Order of Australia or OAM in 2005 after winning a gold medal at the Athens Paralympic Games, and in June 2018 he received an even higher honour when he was appointed an Officer of the Order of Australia or AO.